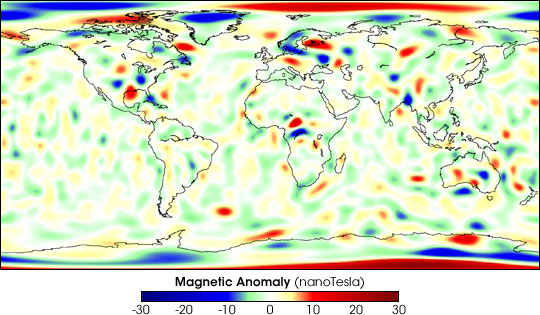 Scientists from NASA and the United States Geological Survey teamed up to produce one of the most accurate and complete databases of the magnetic properties of Earth rocks ever assembled. The database is helpful for scientists conducting surveys of ground water, prospecting for valuable mineral concentrations, or assessing potential earthquake hazards. The data used to produce the colorful map shown above have even proven useful in models used to reconstruct the Earth’s geologic past. By simulating the motions of Earth’s continents and land masses backward in time, over many millennia, scientists can observe where and when the colors fit together neatly like pieces of a jig-saw puzzle, indicating where and when a particular geological formation was first created before Earth’s tectonic forces slowly tore it apart. So these magnetic data are helpful in validating scientists’ simulations of the formation and movements of Earth’s land masses over time.

The map shows variations in Earth’s surface magnetism caused by varying concentrations of magnetic rocks and minerals in the Earth’s uppermost solid rock layer, known as the lithosphere. While magnetically charged objects exert a push or a pull simultaneously in many directions, the colors in this particular image represent only the vertical component of Earth’s surface magnetism. If you imagine the Earth as a giant spherical pin cushion, the lines of the push and pull shown here are like pins radiating vertically outward from, or inward toward, the center of our planet.

The colors in this image represent the direction of magnetic pull. Positive values—shown as red and yellow—indicate magnetic push in the outward direction, and negative values—shown as green and blue—indicate locations with inward magnetic pull. White represents little or no magnetic force in either direction. The units provided here are in nanoTesla. A Tesla is a unit indicating the number of magnetic field lines per square meter. So a nanoTesla would be that same value, divided by one billion. To put that unit into perspective, a typical refrigerator magnet is about 200 times stronger than the strongest magnetic forces represented on this map.

The map was constructed using data collected from a variety of different spacecraft orbiting about 400 km above the Earth, including NASA’s Magsat mission and Polar Orbiting Geophysical Observatory, the German CHAMP satellite, and the Danish Oersted satellite. For more details, please read the NASA press release, entitled NASA and USGS Magnetic Database ‘Rocks’ the World. 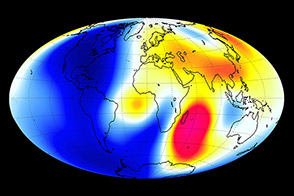 A new constellation of satellites from the European Space Agency can detect minuscule changes in the planet’s magnetic field.