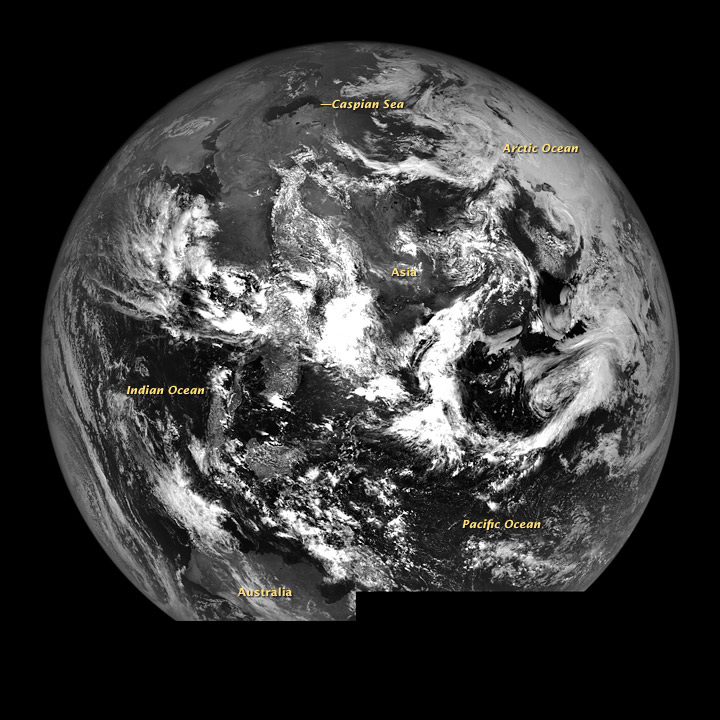 Summer was approaching in the Northern Hemisphere on June 12, 2010, when the Lunar Reconnaissance Orbiter looked home to acquire this image. In orbit around the Moon, the orbiter was about 372,335 kilometers from Earth. Skies over the Middle East were clear, providing a cloud-free view of Arabian Peninsula and the mountains of Iran and Pakistan. Bright clouds stretch in a line from India northeast over the North Pacific Ocean. The other bright region in the image is the polar ice cap over the Arctic Ocean. The reference map provides a cloud-free view to illustrate Earth’s orientation in the image.

The Lunar Reconnaissance Orbiter Camera captured this image as part of a calibration exercise. Like the human eye, the camera records reflected light. The cameras are among seven instruments that are mapping the surface of the Moon from the Lunar Reconnaissance Orbiter, which orbits 50 kilometers above the Moon. Mapping the Moon is a challenge because its color does not change greatly. Changes in rock types provide only small shifts in color. To make sure that the cameras are accurately recording small changes in reflected light, engineers look for a bright light against a dark background to provide a reference point. From the Moon, Earth is an ideal reference point to calibrate the cameras.