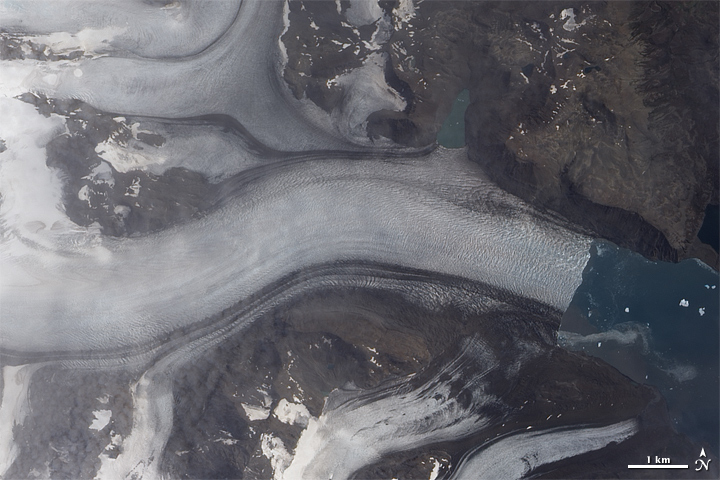 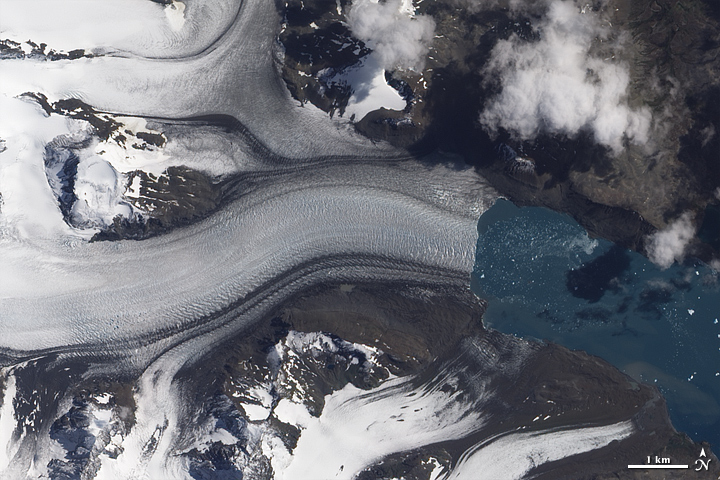 South Georgia is an arc-shaped island that lies some 2,000 kilometers (1,200 miles) east of the southern tip of South America. Along South Georgia’s east coast, Neumayer Glacier has long snaked toward the ocean, occasionally calving icebergs. Prior to 1970, observations of the ice front’s position showed changes in just tens of meters, but the glacier subsequently began losing significant mass, according to a study published in 2008. From roughly 1970 to 2002, Neumayer retreated by roughly 2 kilometers (1.2 miles). As the first decade of the twenty-first century wore on, Neumayer continued losing ice.

The Advanced Land Imager (ALI) on NASA’s Earth Observing-1 (EO-1) satellite captured these natural-color images of the glacier on South Georgia on January 11, 2005 (top), and January 4, 2009 (bottom). In the four years that elapsed between ALI’s observations, the glacier retreated approximately 1 kilometer (0.6 miles).

Besides reducing the glacier’s length, the retreat apparently affected the crevasses (cracks in the ice) upstream on the glacier. The 2009 image shows wider crevasses that extend more toward the east, especially along the glacier’s southern margin. The shifted crevasse pattern suggests possible glacier acceleration in the wake of the breakup of the ice front.

A glacier that extends all the way to the sea while remaining grounded is a tidewater glacier, and the largest glaciers on South Georgia Island, including Neumayer, are tidewater glaciers. Even a tiny change in ocean temperature, whether daily, seasonal, or interannual, translates into a substantial change in the amount of heat available to melt tidewater glaciers. An increase in temperature can cause a cascading effect of changes in calving rate, ice front position, and glacier flow. Changes in glacier flow can manifest as visible changes to the crevasses on the surface.

Besides changes in the glacier, other variations appear between 2005 and 2009. Although acquired at the same time of year, the image from 2009 shows more snow cover around the stream of ice, which could simply be from a snowstorm immediately before that ALI observation. A thin veil of clouds hangs over the region in 2005, whereas skies are clear in 2009, except for some isolated clouds in the northeast.

Acquired January 11, 2005 and January 4, 2009, these images show retreat in the Neumayer Glacier on South Georgia Island.

In less than a decade, Neumayer Glacier has retreated at least 2 kilometers.