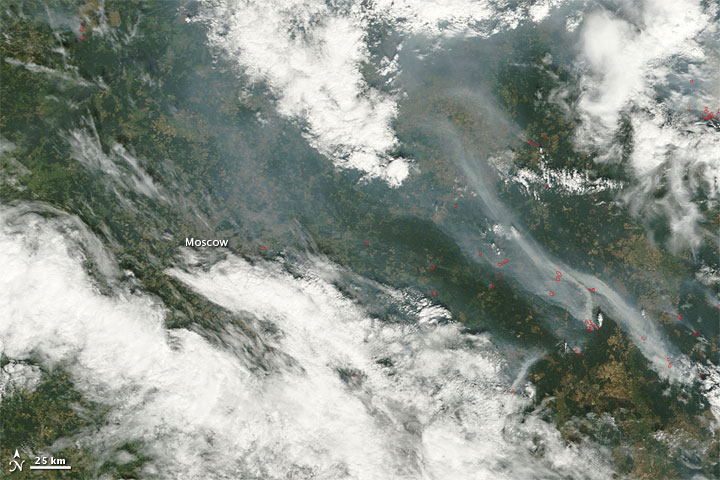 Smoke from peat fires hovered over a sweltering Moscow in late July 2010, the BBC reported. As firefighters tried to put out some 60 fires in the surrounding countryside, authorities advised Muscovites with breathing difficulties to stay inside or wear gauze masks. As peat bogs burned, officials urged employers to give workers siesta breaks during the hottest part of the day, and urged farmers to harvest at night, according to Bloomberg.

The Moderate Resolution Imaging Spectroradiometer (MODIS) on NASA’s Terra satellite captured this natural-color image of Moscow and the surrounding region on July 27, 2010. A cloudbank stops short of hiding the city from the satellite’s view, and north of the clouds, a dull blue-gray haze hangs over the area. East-southeast of Moscow, multiple fires (marked by red outlines) send thick plumes of smoke toward the northwest.

Acquired July 27, 2010, this natural-color image shows haze over Moscow as fires burn in the east-southeast.