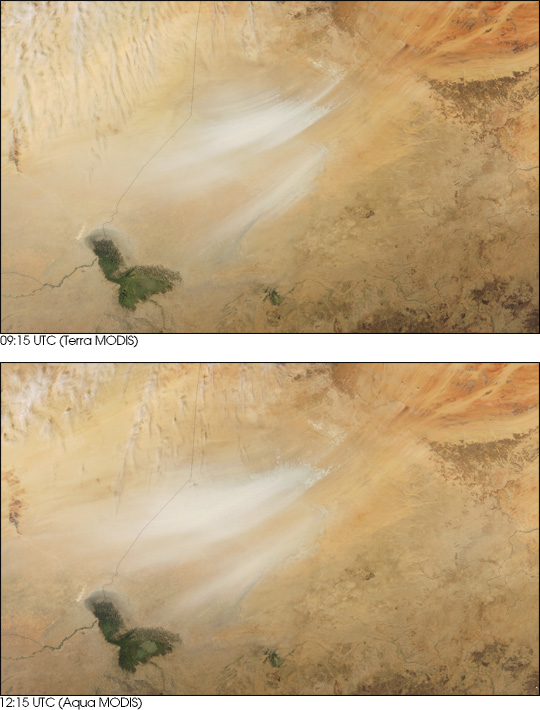 As the wind sweeps between the Tibesti and the Ennedi Mountains in Northern Chad, it is channeled across Chad’s lowest point, the Bodele Depression. The dry bowl that forms the Bodele Depression is one of the most active sources of wind-blown dust in the world. The depression is marked by a series of ephemeral lakes, which may be infrequently flooded with mud-laden water from the mountains. When the lakes dry, a layer of loose clay is left behind. The dirt is easily carried on the wind that blows down from the mountains.

Now, researchers at NASA Goddard Space Flight Center have shown that dust storms move across the Bodele Depression up to two times more quickly than climate models estimated. Using images taken by the Moderate Resolution Imaging Spectroradiometer (MODIS), aboard NASA’s Terra and Aqua satellites, Ilan Koren and Yoram Kaufman measured the movement of dust storms across the Depression. They found that storms move across the Bodele Depression at about 47 kilometers per hour, or 29 miles per hour—two times faster than previously believed. They also found that winds have to whip across the region at a minimum of 36 kilometers per hour, 22 miles per hour, to kick up a dust storm. These findings may help refine meteorological models for the Bodele Depression where data are scarce. Their measurements and the models match more closely when the dust reaches Africa’s Atlantic shores.

Koren and Kaufman made their measurements by observing how dust storms changed between the Terra satellite’s morning overpass and the Aqua satellite’s afternoon observations three hours later. The Moderate Resolution Imaging Spectroradiometer (MODIS) on each satellite delivered a true-color image of a dust storm such as this pair, acquired on February 11, 2004. Here, the storm has grown noticeably larger in the three-hour interval, and is approaching Lake Chad in the scene’s lower left corner. Fifteen storms like this one, recorded between January and April 2003, served as the basis for the study. Koren and Kaufman’s work was published in the March 25, 2004, edition of Geophysical Research Letters.

The Bodele Depression’s frequent dust storms have a long reach and are therefore interesting to scientists across a range of disciplines. Saharan dust occasionally clogs the air in North and South America and in Europe, triggering health problems such as asthma. The dust storms also redistribute soil nutrients. As the dust falls out of the wind, nutrients that were in the soil are spread across the oceans and over the land. The spread of iron-rich Saharan dust has been shown to contribute to biological activity in the ocean as well as on other continents. Finally, dust in the atmosphere affects the Earth’s climate. The dusty haze reflects and absorbs energy from the Sun, so less light reaches the Earth’s surface. Moreover, the dust indirectly changes cloud properties, which affects rainfall.

The high-resolution images provided above are at MODIS’ maximum resolution of 250 meters per pixel. The morning and afternoon images are both available in additional resolutions.