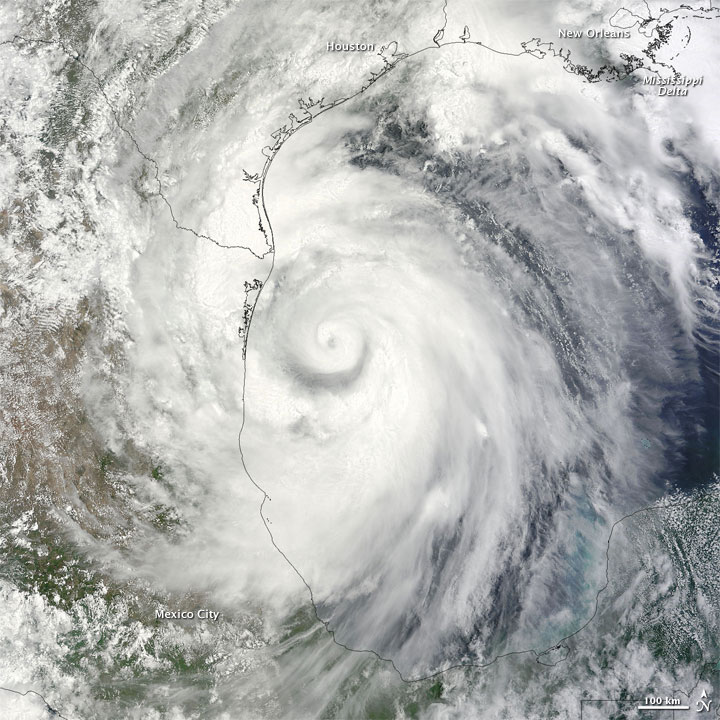 Looking quite a bit more substantial than it did the day before, Hurricane Alex dominated the skies over the western Gulf of Mexico when the Moderate Resolution Imaging Spectroradiometer (MODIS) on NASA’s Terra satellite passed overhead and captured this image at 12:10 p.m. Central Daylight Time on June 30, 2010.

Compared to the image acquired the previous day, Alex appears tighter, with fewer areas of clear sky or thin clouds within the body of the storm. A distinct eye appears at the center of the storm, not far from the coast of northern Mexico. Overall, Alex has shifted slightly toward the northwest, consistent with earlier forecasts.

In its 1:00 p.m. CDT bulletin, the National Hurricane Center reported that Alex had maximum sustained winds of 85 miles per hour (135 kilometers per hour), and the storm was headed northwest at 12 mph (18 km/hr). This path drew it away from a direct pass over the ongoing oil slick, but high winds and waves from the storm were likely to affect the ongoing clean up efforts for a time, according to The New York Times.

The arrival of the first hurricane in June is in keeping with the National Hurricane Center’s prediction of an above-average storm season. It is rare for a tropical storm to intensify to a hurricane in June. The last time it happened was in 1995, when Hurricane Allison formed in early June. The NHC predictions for an active season were based in part on the end of El Niño conditions in the Pacific and a possible transition to La Niña, as well as on the unusually high sea surface temperatures in the Caribbean and tropical Atlantic.