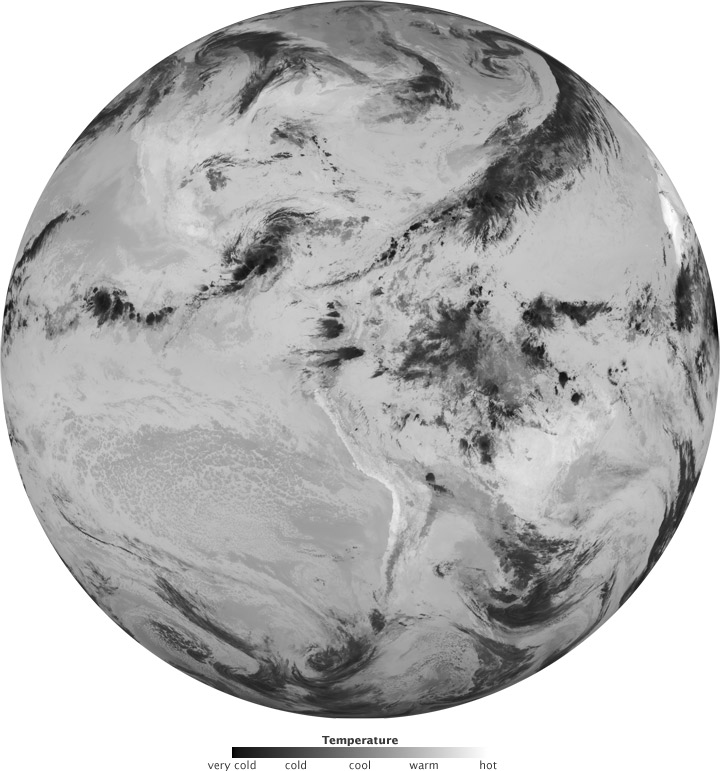 Clouds are vehicles for energy. They carry solar energy from the warm tropics to other parts of the globe through weather systems. But they also act as gatekeepers between Earth and space, helping regulate the global temperature by capturing and releasing infrared (thermal) energy in the atmosphere. In this respect, clouds are like greenhouse gases. As detailed in the Earth Observatory’s newly updated article, Global Warming, if clouds change as a result of global warming, the change could cause additional warming.

This image, acquired by the GOES satellite on May 30, 2010, shows thermal energy in the Western Hemisphere. The areas that are warmest and therefore emitting the most thermal energy are white and pale gray. The desert lining the Pacific coast of South America is a bright white strip in the lower center of the globe. The coldest regions emitting the least amount of thermal energy are dark gray and black. These dark spots on the globe are high clouds.

Clouds emit energy in proportion to their temperature. Low, warm clouds emit more thermal energy than high, cold clouds. This image illustrates that low clouds emit about the same amount of thermal energy as Earth’s surface does. This is most clearly seen over the Pacific Ocean. The water is nearly white, while the low marine clouds are pale gray, only slightly cooler. This means that a world without low clouds loses about the same amount of energy to space as a world with low clouds.

High clouds are much colder than low clouds and the surface. They radiate less energy to space than low clouds do. The high clouds in this image are radiating significantly less thermal energy than anything else in the image. Because high clouds absorb energy so efficiently, they have the potential to raise global temperatures. In a world with high clouds, much of the energy that would otherwise escape to space is captured in the atmosphere. High clouds make the world a warmer place. If more high clouds were to form, more heat energy radiating from the surface and lower atmosphere toward space would be trapped in the atmosphere, and Earth’s average surface temperature would climb.

Clouds impact temperatures in other ways as well. They also reflect energy, shading and cooling the Earth. On balance, scientists aren’t entirely sure what effect clouds will have on global warming. Most climate models predict that clouds will amplify global warming slightly. Some observations of clouds support model predictions, but direct observational evidence is still limited. Clouds remain the biggest source of uncertainty (apart from human decisions to control greenhouse gas emissions) in predicting how much global temperatures will change.

NASA image by Rob Simmon based on data from the GOES Project Science Office. Caption by Holli Riebeek.