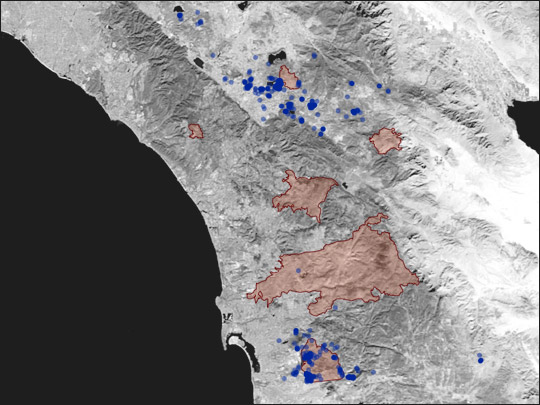 In fall of 2003, southern California experienced the worst fire season in the state’s recorded history. Among the scores of losses caused by the fires was the damage and destruction of habitat for four species of animals listed as endangered or threatened under the Federal Endangered Species Act: two birds, the coastal California gnatcatcher and the least Bell’s vireo; the southern California mountain yellow-legged frog; and the Quino checkerspot butterfly. An analysis conducted by the California-based Center for Biological Diversity (a non-profit, public interest, environmental organization) documents the impact of the wildfires on these four species.

The image above illustrates the impacts of the fires on the Quino butterfly habitat. The group mapped the known locations of the Quino butterfly (blue points), and then they merged those observations with the boundaries of burned areas (red) based on Burned Area Emergency Rehabilitation Reports from the U.S. Forest Service and the Department of the Interior.

According to their analysis, about 28 percent of the known locations of the butterfly were affected by mostly low-severity burns. The scientists who conducted the analysis said that while fire is a natural part of the southern California ecosystem, these species have already suffered population losses from a host of other pressures, including loss of habitat to urban sprawl. The Quino butterfly is very sensitive to invasions of non-native plants, a common problem with fire-scarred landscapes. The analysis provides a new baseline for describing the condition of the butterfly’s habitat.

The Website of the Center for Biological Diversity provides a press release about the report, as well as the full report, which details the impacts on the Bells vireo, the coastal gnatcatcher, and the yellow-legged frog.

The image above is a composite of Quino butterfly sighting locations and data from the Moderate Resolution Imaging Spectroradiometer (MODIS) on the Terra satellite.

In late October 2007, a firestorm exploded across southern California. Fueled by dry vegetation and powerful Santa Ana winds, California’s wildfires scorched nearly 30,000 acres (120 square kilometers) in the autumn of 2007. By March of the following year, the burned areas had re-grown with lush vegetation, but by May 2008, that vegetation had dried, providing potential fuel for another firestorm.