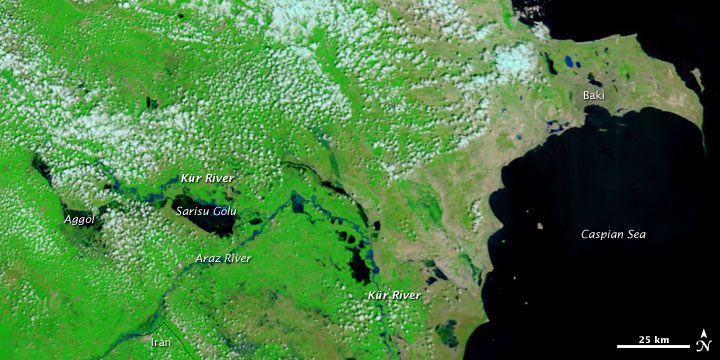 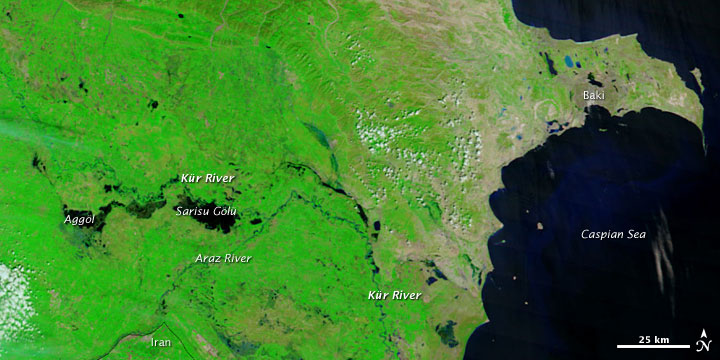 Severe floods struck Azerbaijan in early May 2010, according to Radio Free Europe / Radio Liberty. Hardest hit was a marshy region southwest of the capital city of Baki (Baku) where the Araz and Kür (Kura) Rivers meet. By mid-May, residents were evacuating villages in this area as authorities reported that a dam upstream on the Kür River was at capacity. To relieve pressure on the dam, water would likely need to be released from the Mingäçevir Su Anbari, or Mingachevir Reservoir (northwest of the region shown here, visible in the large images), but this step would add to the floodwaters downstream.

The Moderate Resolution Imaging Spectroradiometer (MODIS) on NASA’s Terra satellite captured these images of the flood-affected areas of Azerbaijan on May 14, 2010 (top), and April 21, 2010 (bottom). Both images use a combination of infrared and visible light to increase the contrast between water and land. Water is dark blue, vegetation is green, bare ground is beige, and clouds are light blue.

The most obvious differences between these images is the expansion of Sarisu Gölü and, southeast of that water body, the accumulation of standing water along the Kür River. In the west, Aggöl appears relatively unchanged.