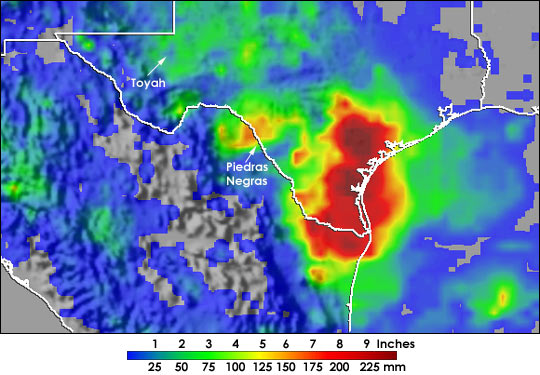 Flash floods claimed the lives of at least 34 people in northern Mexico and 6 people in Texas between April 3 and April 7, 2004. A stationary front draped across southwest Texas along the Rio Grande valley, and a deep upper-level low pressure center over Arizona provided the focus for storms from eastern New Mexico across west Texas and down to the Texas Gulf Coast. Surface high pressure over the central US also helped to channel low-level moisture westward across Texas from the Gulf of Mexico.

The ensuing storms triggered flash floods across west Texas and parts of nearby Mexico. In the tiny west Texas town of Toyah, Interstate 20 was closed as flash floods washed out a bridge. About 8 inches of rain were reported to have fallen there over a two hour period on Saturday night April 3, 2004. Across the Rio Grande in the Mexican town of Piedras Negras, over 34 people have been listed as killed with many others still missing when the Escondido River, a tributary of the Rio Grande, over flowed its banks on Sunday night April 4. The river rose 25 feet (7.5 meters) as a result of intense rains over the area.

The TRMM-based, near-real time Multi-satellite Precipitation Analysis (MPA) at the NASA Goddard Space Flight Center monitors rainfall over the global tropics. This image shows MPA rainfall totals over the region from March 31 to April 5, 2004. A large area of 7-inch rainfall totals (red areas) covers most of southern Texas and extends across the Rio Grande into far northeast Mexico with localized areas of up to 10 inches (dark reds).

MPA rainfall in the area surrounding Toyah, Texas, is only on the order of 2 to 4 inches. Flash floods are often associated with brief, small-scale features such as individual thunderstorms that can be hard to resolve with satellite data. The rainfall around Piedras Negras, however, appears to be better resolved with MPA amounts there on the order of 5 to 7 inches (orange area).