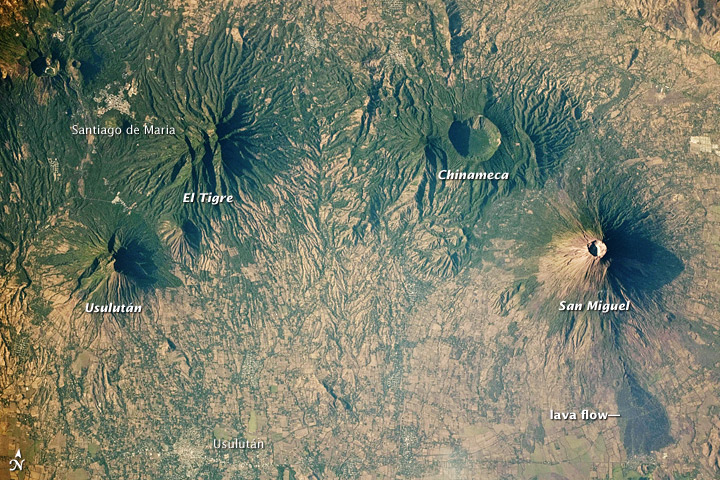 The Pacific coastline of much of Central America is marked by a line of active and quiescent volcanoes known to geologists as the Central American Volcanic Arc. The volcanoes result from the upward movement of magma generated along the subduction zone between the Cocos and Caribbean tectonic plates. Frequent earthquakes also occur along the plate boundary. This astronaut photograph includes four stratovolcanoes—a type of volcano common in active subduction zones—in El Salvador, near the midpoint of the Central American Volcanic Arc.

While all of the volcanoes shown here have been active during the Holocene Epoch (from about 10,000 years ago to the present), only the 2,130-meter- (6,990-foot-) high San Miguel (also known as Chaparrastique) has been active during historical times. The most recent activity of San Miguel was a minor gas and ash emission in 2002. The stratovolcano’s steep cone shape and well-developed summit crater are evident, along with dark lava flows. Immediately to the northwest, the truncated summit of Chinameca Volcano (also known as El Pacayal) is marked by a two-kilometer- (one-mile-) wide caldera. The caldera formed when a powerful eruption emptied the volcano’s magma chamber, causing the chamber’s roof to collapse. Like its neighbor San Miguel, Chinameca’s slopes host coffee plantations.

Moving to the west, the eroded cone of El Tigre Volcano is visible. El Tigre formed during the Pleistocene Epoch (1.8 million to about 10,000 years ago), and it is likely the oldest of the stratovolcanoes in the image. Usulután Volcano is directly southwest of El Tigre. While the flanks of Usulután have been dissected by streams, the mountain still retains a summit crater that is breached on the eastern side. Several urban areas—recognizable as light gray to white regions contrasting with green vegetation and tan fallow agricultural fields—are located in the vicinity of these volcanoes, including the town of Usulután (lower left) and Santiago de Mara (upper left).

Astronaut photograph ISS023-E-22411 was acquired on March 31, 2010, with a Nikon D3X digital camera fitted with an effective 340 mm lens, and is provided by the ISS Crew Earth Observations experiment and Image Science & Analysis Laboratory, Johnson Space Center. The image was taken by the Expedition 23 crew. The image in this article has been cropped and enhanced to improve contrast. Lens artifacts have been removed. The International Space Station Program supports the laboratory as part of the ISS National Lab to help astronauts take pictures of Earth that will be of the greatest value to scientists and the public, and to make those images freely available on the Internet. Additional images taken by astronauts and cosmonauts can be viewed at the NASA/JSC Gateway to Astronaut Photography of Earth. Caption by William L. Stefanov, NASA-JSC.

Differences in size and surface features reveal the histories of four adjacent volcanoes.