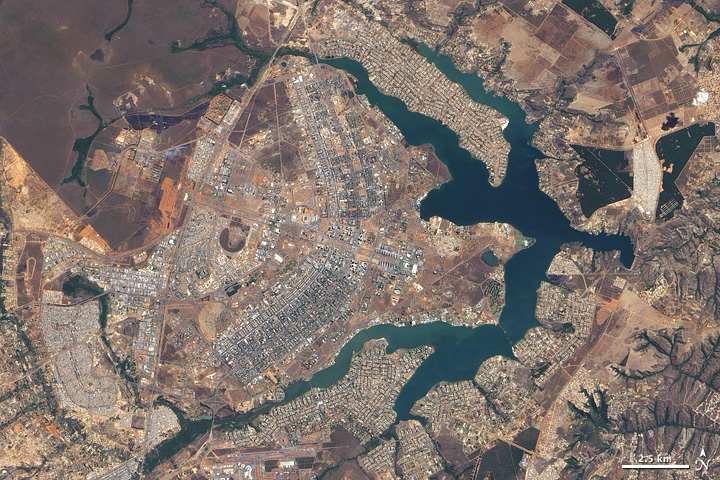 Brazil’s earliest national capitals—Salvador and Rio de Janeiro—sat along the coastline. These sites were well suited to trade, but vulnerable to maritime raids. In the late nineteenth century, leaders of the Brazilian Republic resolved to move the capital city inland. Large-scale construction on the site began in the 1950s. On April 22, 1960, the nearly complete capital city of Brasília opened.

The Advanced Land Imager (ALI) on NASA’s Earth Observing-1 (EO-1) satellite captured this natural-color image of Brasília on August 21, 2001. August falls within Brasília’s dry season, with just 3 centimeters (1 inch) of rain, and the earth tones that dominate the landscape suggest that non-irrigated vegetation may be dormant. Buildings and roads appear off-white, gray, or pale tan.

The city, whose overall design has been compared to a bird and an airplane, among other shapes, sits west of an artificial lake, Lago Paranoá. The branching lake sends its tendrils deep into the city, helping separate the downtown area (image center) from residential areas to the north- and southeast. Northwest of the city lies Brasília National Park, which preserves a large expanse of cerrado, the tropical savanna ecosystem natural for the area.

Planned settlements, such as Italy’s Palmanova, date back centuries, but Brasília has become a model of urban planning, credited with implementing the principles of the Athens Charter of 1933, such as strict zoning and separation of residential areas and transportation channels.

Optimistic planners envisioned a city that wouldn’t even need traffic lights, thanks to a clever road plan. The planners did not, however, foresee the city’s dramatic growth. Today, Brasília has traffic lights. It even has the occasional traffic jam. Nevertheless, the city’s pioneer status in urban planning prompted the United Nations Educational, Scientific and Cultural Organization (UNESCO) to name Brasília a World Heritage Site in 1987.

Sitting between an artificial lake and a national park, Brasilia, Brazil, is recognized as a pioneer in the use of rigorous urban planning to create livable cities.