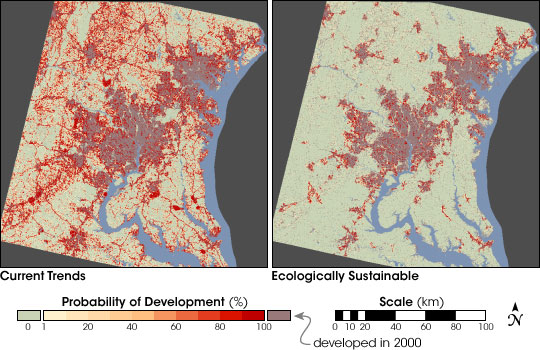 NASA-funded researchers recently used a computer model and satellite data to predict urban growth in and around Washington and Baltimore. According to the model, developed land in the greater Washington-Baltimore metropolitan area may increase 80 percent by 2030. Scientists used a computer-based decision support model loaded with NASA and commercial satellite images to simulate three scenarios affecting land use—Current Trends, Managed Growth, and Ecologically Sustainable.

Observations from NASA and commercial Earth observation satellites were used in a United States Geological Survey (USGS) computer model, called SLEUTH. The model was applied to 23,700 square kilometers (9151 sq. miles) of the Washington-Baltimore metropolitan area. The initial aim was to simulate the impact of future policy scenarios on the area and Chesapeake Bay watershed. “The satellite observations provided us with an unprecedented ability to monitor the urbanization process and capture the patterns of urban sprawl,” said Scott Goetz, from the University of Maryland.

“The model is a tool that can be used for land use planning and resource management,” said Claire Jantz, from the Woods Hole Research Center. “It offers the ability to explore and visualize alternative futures.”

For more information, read NASA Uses a "Sleuth" to Predict Urban Land Use

Growth in Washington, District of Columbia