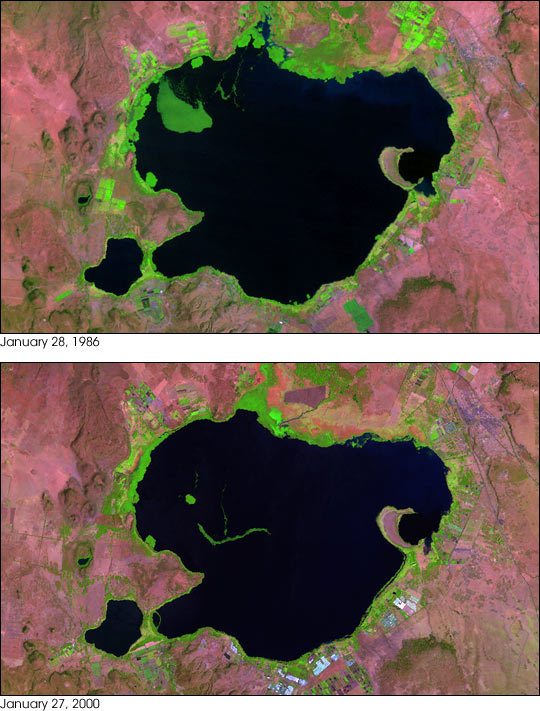 In southwestern Kenya, northwest of the city of Nairobi, is Lake Naivasha. Naivasha is one of many large and small lakes that occupy eastern Africa’s long Rift Valley, a north-south running depression that has formed where the tectonic plates underlying the continent are pulling away from each other. The freshwater lake occupies a very dry part of the country, and its presence makes possible an agricultural industry focused on fruits, vegetable, vineyards, and more recently, flower cultivation for world markets.

The increasing development of the land surrounding the lake is evident in this pair of images from the Landsat satellite from 1986 (top) and 2000 (bottom). Vegetation appears green, bare ground or low vegetation appears in shades of pink. Urban development appears purple, and water appears deep blue. The increase in the size of the city of Naivasha to the northeast of the lake (at about 2 o’clock) is apparent. New development has sprung up in the south and southeast as well, where bright, reflective rooftops glimmer in the sun. More signs of cultivated land are visible, including the eye-catching, pie-chart shaped fields north of Naivasha (see high-resolution image from 2000). This increase in agricultural development, particularly the flower industry is being blamed by many for a rapid decline in water levels in the lake. The lake also experiences wide year-to-year fluctuations in surface area because it is shallow and highly dependent on rainfall. Indeed, the apparent general decrease in “greenness” around the lake’s perimeter in the 2000 image may be linked to year-to-year variability, since much of the surrounding terrain is less green as well.

Images by Jesse Allen, based on data provided by University of Maryland Global Land Cover Facility