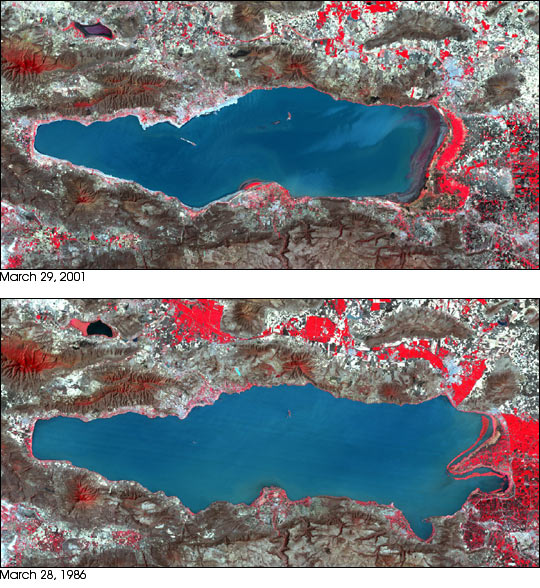 Resting in a tectonic basin south of Guadalajara, Lake Chapala is the largest lake in Mexico. The lake and other wetlands in the Río Lerma watershed are important sites for migratory, rare, and endemic (found nowhere else) waterfowl, and the lake is part of a regional pattern of endemic fish species. Lake Chapala is important economically for tourism, recreation, and fishing.

As in other parts of the world, increasing human demand and inefficient use of water are superimposed upon a naturally varying and ecologically unique system of rivers, lakes, canals, and wetlands. Conflicts over water use in the basin have arisen between states and among agricultural, industrial, hydroelectric, municipal, and environmental interests.

Although the level of the lake has always fluctuated in response to seasonal rainfall and large-scale climate events, it has experienced long-term decline since the late 1970s. Expansion of agricultural development upstream in the Río Lerma watershed has diminished inflow to the lake. Since the early 1990s, increased municipal and industrial use by Guadalajara, Mexico’s second-largest urban area, has directly reduced lake volume.

The Landsat imagery above illustrates changes in the lake from 1986 to 2001. The surface area of Lake Chapala in March 1986 was 1,048 square kilometers (259,000 acres). By March 2001, it had diminished to 812 square kilometers (201,000 acres). In just five years, the lake lost 226 square kilometers, or just less than 60,000 acres, of surface area. The city of Washington, D.C., could be relocated to the exposed shoreline with room to spare! This loss corresponds to a water level decline between 2 and 4 meters (6.6 to 13.2 feet), and the change in depth has been accompanied by at least a 50 percent loss of water volume. By some estimates, today’s lake is only one-quarter of its historic capacity.

Water now seldom flows from the lake to the Río Santiago, its natural outlet. The lake’s internal circulation and hydrologic balance are drastically different from historic patterns. Agricultural chemical residues, heavy metals, and dissolved solids have increased due to inputs from upstream and to evaporation from the shallow lake. These changes have contributed to periodic expansion of algae and non-native aquatic plants, diminished quality of commercial fisheries, and impoverished diversity of native fish species. Contaminated and reduced fish stocks pose health threats to both humans and birds that consume them.

Local university-led and non-profit groups are heading conservation, education, and international environmental advocacy efforts to improve water management. Research is underway to support nomination of wetland sites in the basin to the Ramsar List of Wetlands of International Importance, the product of a 1971 international treaty that seeks conservation and wise use of wetlands and their resources. Through the sponsorship of groups such as the Lerma River, Lake Chapala, and Santiago River Foundation, the Friends of Chapala Society, and the Integral Basin Management Project based at the University of Guadalajara, Lake Chapala has become a member of the Living Lakes Partnership, an international group which promotes protection and non-damaging uses of freshwater ecosystems consistent with United Nations goals for sustainable development.

Even as these conservation activities continue, the government of the state of Jalisco is planning new hydrologic development to ensure an adequate water supply to the city of Guadalajara, and disagreements persist regarding the role of irrigation practices by upstream farmers in the water supply crisis. Lake Chapala is in the inauspicious company of many shrinking lakes worldwide and its future remains uncertain.