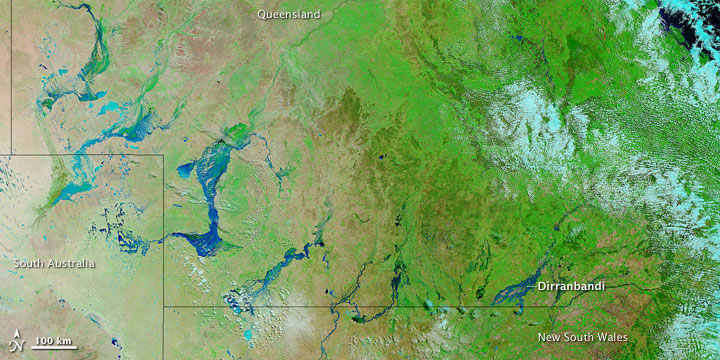 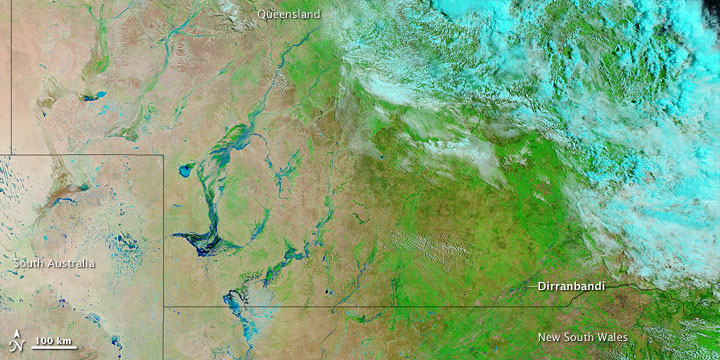 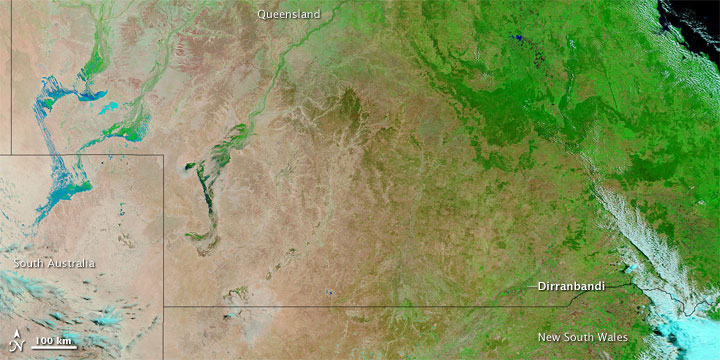 By mid-March 2010, flooding in southwestern Queensland had caused hundreds of millions of dollars worth of damage. The Dartmouth Flood Observatory reported that as much at 80 percent of Queensland had been declared a natural disaster area, and towns in northern New South Wales were also expected to face flooding. Floodwaters were forecast to travel south from the region around Dirranbandi.

The Moderate Resolution Imaging Spectroradiometer (MODIS) on NASA’s Terra satellite captured these images of southwestern Queensland before and after much of the state was declared a natural disaster area. The top image was taken on March 14, 2010. For comparison are two before images, one from February 17, 2010 (middle), and March 16, 2009 (bottom). These images all use a combination of infrared and visible light to increase the contrast between water and land. Vegetation, even sparse vegetation, appears bright green. Clouds appear sky blue. Water varies in color from electric blue to navy. Bare ground appears tan.

The difference between March 2009 and 2010 is dramatic. Where the land was almost completely dry the year before, channels are filled with water in 2010, especially in the east. Significant differences also occur between the image from February and March 2010. In February, water bodies appear, but they are much smaller. As in March 2009, water channels in the east hold no discernible water. Compared to March 2009, however, February 2010 shows a generally greener appearance, evidence of more vegetation.

Southwestern Queensland is known as Channel Country where, when rainfall is sufficient, temporary rivers run through typically dry channels.