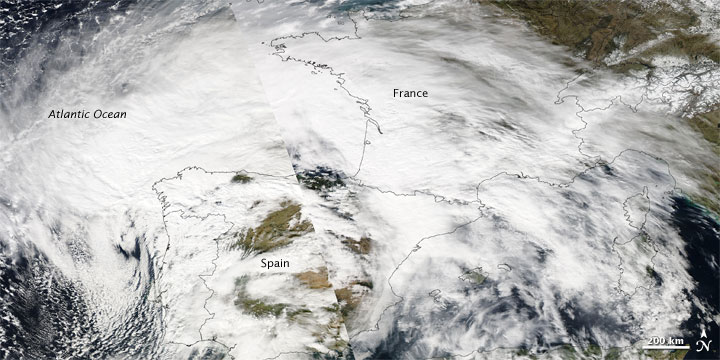 An extratropical cyclone named Xynthia brought hurricane-force winds and high waves to Western Europe at the end of February 2010, CNN reported. Winds as fast as 200 kilometers (125 miles) per hour reached as far inland as Paris, and at the storm’s peak, hurricane-force winds extended from Portugal to the Netherlands. Hundreds of people had to take refuge from rising waters on their rooftops. By March 1, at least 58 people had died, some of them struck by falling trees. Most of the deaths occurred in France, but the storm also caused casualties in England, Germany, Belgium, Spain, and Portugal.

The Moderate Resolution Imaging Spectroradiometer (MODIS) on NASA’s Aqua satellite captured this image of Western Europe, acquired in two separate overpasses on February 27, 2010. MODIS captured the eastern half of the image around 10:50 UTC, and the western half about 12:30 UTC. Forming a giant comma shape, clouds stretch from the Atlantic Ocean to northern Italy.

The large version of this image has a resolution of 1 kilometer.