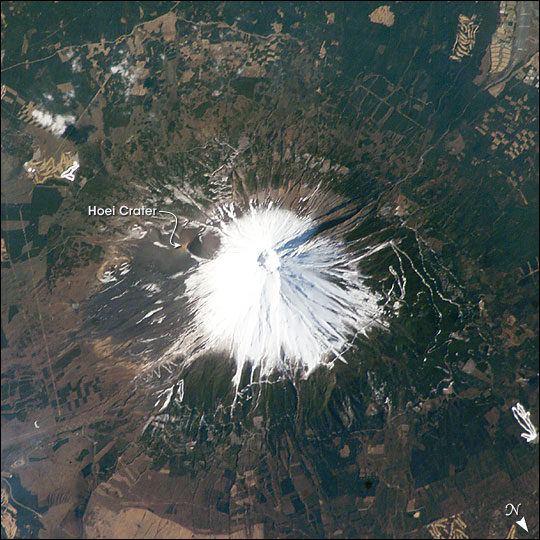 Fuji, Japan’s tallest volcano (3,776 m) and a national symbol, is located about 110 km (70 miles) west-southwest of Tokyo in central Honshu, Japan. It is a highly recognizable target from space and last week International Space Station crew members peered down onto Fuji’s snow-capped cone. The summit crater is about 250 m deep, with a diameter of about 500 meters. Fuji last erupted in 1707 from Hoei crater, a vent on the mountain’s southeastern flank.

When this image was taken, the winter snow cover highlighted trails, roads, and other clearings above a certain elevation. Developments on Fuji’s lower flanks, which include military installations and tourist resorts, remained snow-free.

Astronaut photograph ISS008-E-17326 was taken on February 28, 2004, with a Kodak DCS760 digital camera equipped with an 400-mm lens, and is provided by the Earth Observations Laboratory, Johnson Space Center. The International Space Station Program supports the laboratory to help astronauts take pictures of Earth that will be of the greatest value to scientists and the public, and to make those images freely available on the Internet. Additional images taken by astronauts and cosmonauts can be viewed at the NASA/JSC Gateway to Astronaut Photography of Earth.