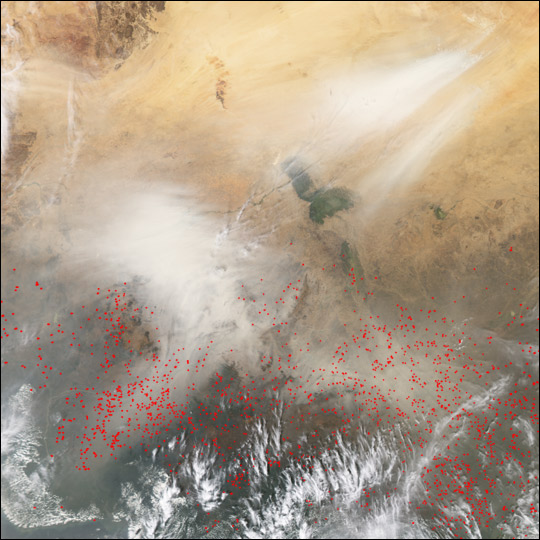 A combination of dust of smoke clouds the air over Nigeria, Cameroon, and Chad in this Moderate Resolution Imaging Spectroradiometer (MODIS) image acquired on January 8, 2004, by the Aqua satellite. The streak of white in the top right corner is dust blowing out of the Bodele Depression. Dust storms in the Bodele depression are common. As recently as the 1960s, the area formed part of Lake Chad on the southern edges of the vast Sahara desert. Lack of rain and increased demand for irrigation water shrank the shorelines of the lake, leaving the Bodele depression dry. The low-lying area is now a major source of windblown dust in Europe, the Middle East, and the Western Hemisphere.

The white and tan clouds in the center of the image are probably a mixture of Saharan dust and smoke from the hundreds of agricultural fires burning across the region, shown as red dots. Burning is a common method of clearing farmland in central Africa. For more information, see Fires in West Africa.

The high resolution image provided above is at MODIS' maximum resolution of 250 meters per pixel.

Dust Storm in the Bodele Depression