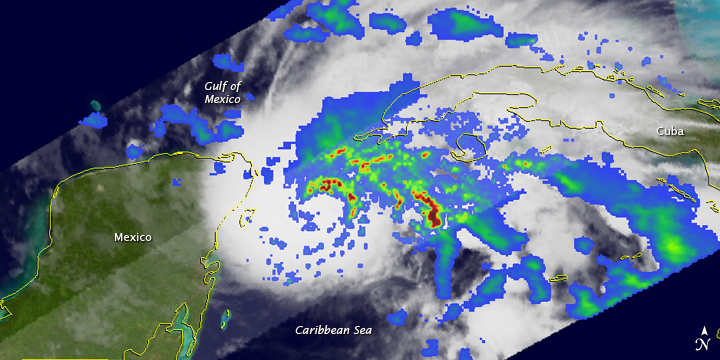 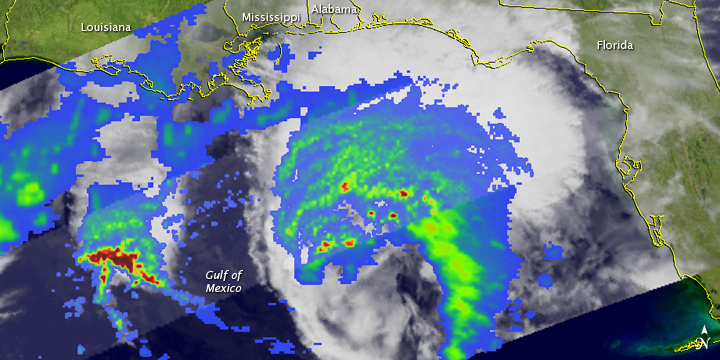 Hurricane Ida was strengthening when it entered the Gulf of Mexico on November 8, 2009. The storm formed over the Caribbean Sea on Wednesday, November 4, and moved ashore over Nicaragua the following day. After re-emerging over the Caribbean, the storm gradually grew stronger as it moved north. By the time the Tropical Rainfall Measuring Mission (TRMM) satellite observed Ida at 5:34 a.m., U.S. Central Time, on November 8, it had become a Category 1 hurricane with winds near 90 miles per hour (150 kilometers per hour), said the National Hurricane Center. By the end of the day, Ida would reach its maximum strength, with winds near 105 mph (165 km/hr), a Category 2 storm.

The top image shows rainfall within Hurricane Ida on November 8. Bands of heavy rain, shown in red, circle around the northeast part of the storm’s center. Another band of heavy rain stretches across the top of the storm.

The lower image shows Hurricane Ida on November 9 at 6:17 a.m. U.S. Central Time. Though Ida was still a hurricane, it was quickly weakening. While spots of heavy rain remain, the storm’s circular organization is no longer apparent in the lower image. The National Hurricane Center forecast that Ida would move over the United States on November 10.