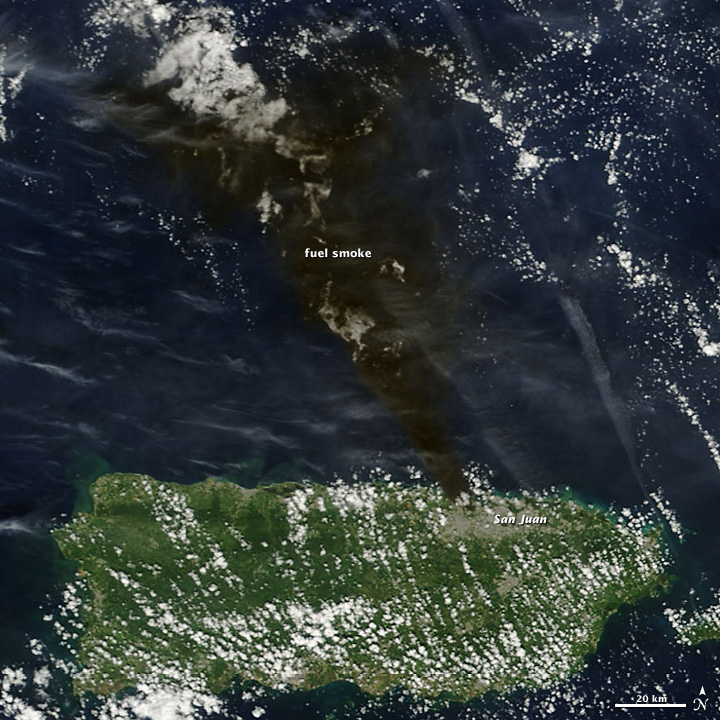 On the morning of October 23, 2009, an explosion rocked fuel storage tank facilities near San Juan, Puerto Rico, with the same force as a 2.8-magnitude earthquake, according to CNN. Authorities evacuated hundreds from the area, and firefighters battled blazes for two days, finally extinguishing the fire on October 25. As of October 26, authorities were still trying to determine whether the fire had been accidental or intentional, according to news reports.

The Moderate Resolution Imaging Spectroradiometer (MODIS) on NASA’s Terra satellite captured this true-color image on October 23, 2009. Although most of Puerto Rico appears green, the fire occurs in a gray-beige area of urbanization, the San Juan metropolitan area. According to Reuters, the fire broke out in Cataño, which lies across a small bay from San Juan proper.

Although smoke from burning vegetation is typically gray, this smoke is almost dark enough to disappear against the background of deep blue ocean water. Fire from burning oil frequently appears almost black, as oil fires from Libya and Iraq show.

A plume of dark brown smoke billows northwest from a fire at a Puerto Rico fuel storage facility in this image from October 23, 2009.