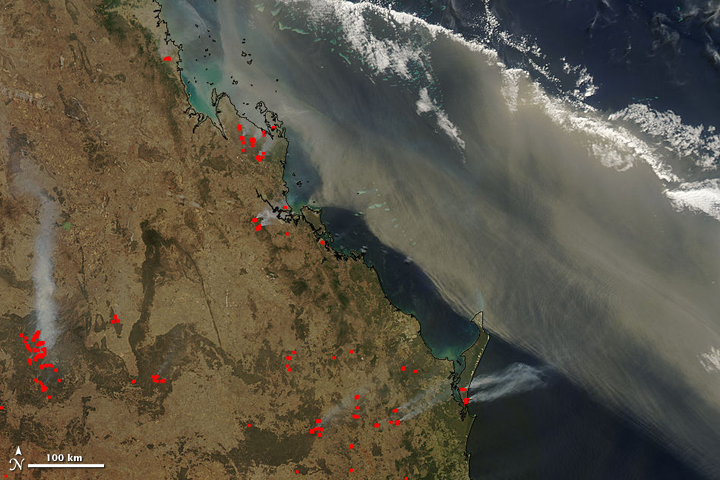 The thick wall of dust that blew across Australia on September 26, 2009, hung in a slightly thinner veil over the Coral Sea on September 27. Ripples and waves in the dust plume indicate turbulence in the air. The dust will gradually settle over the ocean, where it will provide a source of iron to phytoplankton, microscopic plant-like organisms that grow in sunlit surface water. The iron acts as fertilizer, making it possible for large phytoplankton blooms to develop.

While phytoplankton are an important source of food for marine life, the decay of an overabundance of phytoplankton can rob the ocean of oxygen, creating dead zones. Ocean biologists will watch closely to see if and how the immense dust storms of September 2009 will affect Australia’s Great Barrier Reef, visible as blue-green dots in the top center of the image.

The Moderate Resolution Imaging Spectroradiometer (MODIS) on NASA’s Aqua satellite captured this image on the afternoon of September 27, 2009. Red dots and plumes of smoke mark the locations of dozens of fires burning throughout Queensland. The large image provided above has a resolution of 250 meters per pixel, MODIS’ maximum resolution. The image is available in additional resolutions from the MODIS Rapid Response System.