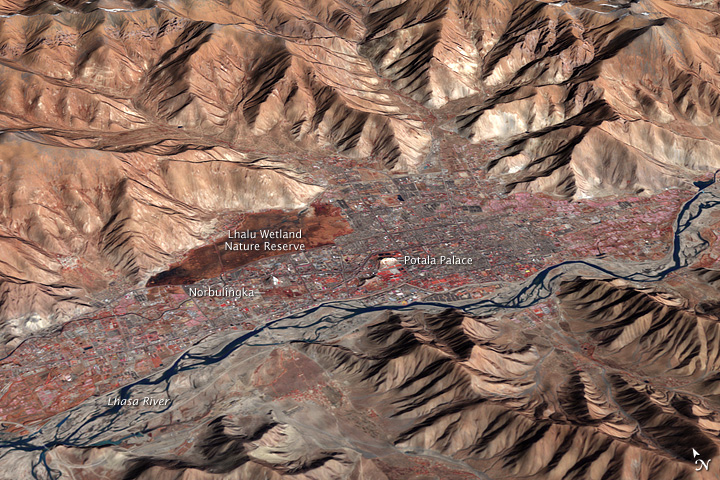 With an elevation of 3,650 meters (11,975 feet), Lhasa, Tibet is one of the highest elevation cities in the world. The city fills a flat river valley nestled in the ranges of the Himalaya Mountains. This image, from the Advanced Spaceborne Thermal Emission and Reflection Radiometer (ASTER) on NASA’s Terra satellite, provides a three-dimensional view of the landscape created from the instrument’s stereo sensors.

Mountains seem to radiate spoke-like from the flat plain on which the city is built. The high mountains are brown: little vegetation was growing on November 24, 2005, when the image was taken. The city, however, is an oasis. Lhasa is red and silver in the false-color image in which plant-covered land is red and man-made surfaces tend to be silver or white. The Lhasa River winds through the valley. Its wandering channels provide evidence that the ground is relatively flat, since the topography of the land isn’t forcing the river’s course.

Lhasa is the administrative capital of the Tibet Autonomous Region in the People’s Republic of China. Situated in the center of the Tibetan Plateau, the city has a long history of government. The city’s most famous landmarks, the Potala Palace and the Norbulingka, were the winter and summer homes of the Dalai Lama, the political and religious leader of Tibet until 1959. The two landmarks are the most prominent features within the city in this image. The fortress-like Potala Palace complex sits on a small rise in the center of the city, forming two large white squares that are roughly the size of the city blocks visible around the complex. It is the largest single man-made surface in the image. The summer palace, Norbulingka, by contrast, is the largest park in the image. It is the red, plant-covered rectangle west of Potala Palace. The two sites together are a World Heritage Site.

Another notable feature in the image is the Lhalu Wetland Nature Reserve on the northern side of the city. The reserve is red-brown, with black smudges where water darkens the surface. The natural wetland influences Lhasa’s climate, adding humidity to the city. The plants are also an important source of oxygen to a city with a thin, high-altitude atmosphere. The Lhalu Wetland Nature Reserve provides habitat for a wide range of birds.

This three-dimensional view of Lhasa, Tibet illustrates how the city fills a flat river valley nestled in the ranges of the Himalaya Mountains in southern China.