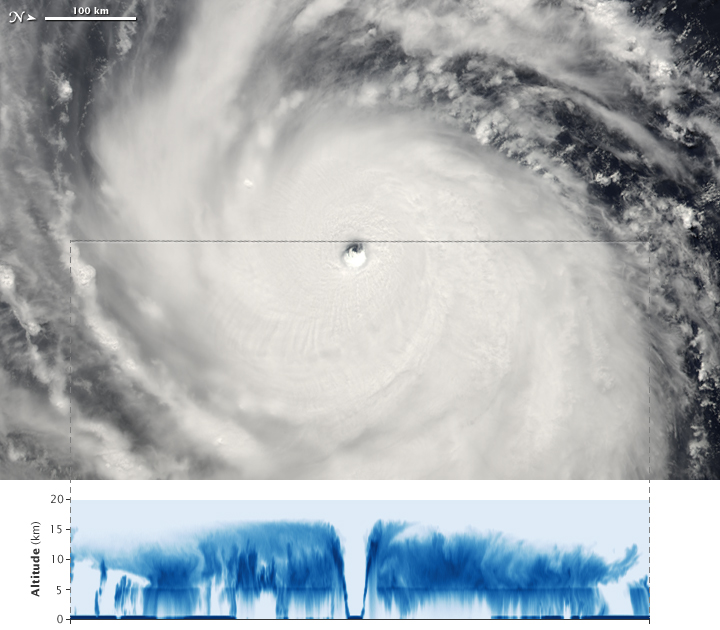 Super Typhoon Choi-wan had just become a Category 4 super typhoon on the morning of September 15, 2009, when the Moderate Resolution Imaging Spectroradiometer (MODIS) on NASA’s Aqua satellite captured the top image. Approximately a minute later, the CloudSat satellite also flew over the storm system. Cloudsat’s flight path (a section of which is shown as a grey line across the MODIS image) took it just north of the eye at the center of the storm.

At the time the images were taken, Choi-wan had sustained winds estimated at 240 kilometers per hour (150 miles per hour or 130 knots), according to the Joint Typhoon Warning Center. Choi-wan was strengthening. Less than twenty-four hours later, the storm reached Category 5 status with sustained winds of 260 km/hr (160 mph or 140 knots), a strength it maintained for a day before weakening to Category 4 strength on September 17. The images reflect the extreme power of the storm. In the top photo-like image, Choi-wan is formidable-looking, with tightly spiraling bands of clouds and a distinct eye.

The lower image provides a vertical profile of the storm. The satellite’s radar recorded the cloud structure, capturing a vertical cross section view of the storm. The dense clouds at the center of the storm tower above fifteen kilometers. Most distinctive is the eye, which is completely clear to sea level. The clouds on either side of the eye are dense, sending a strong radar signal back to the satellite as indicated by the dark blue color.

Like a ground-based weather radar instrument, Cloudsat sees storm structure by bouncing pulses of energy off cloud particles and recording the strength of the echo. The radar picture gives an idea of the shape and height of the clouds you would have seen if you could have sliced away the eastern half of the storm and looked in at it from the side. Dense clouds will return a stronger echo, and higher clouds will return an echo more quickly. Cloudsat sees tiny particles of ice and water within clouds. It is 1,000 times more sensitive than ground-based weather radar instruments, which measure large drops of water (rain) within clouds. 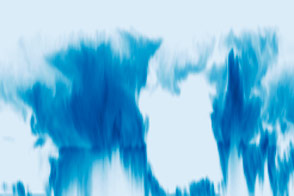 Side Profile of Typhoon Neoguri

CloudSat captured a vertical slice of the potent storm on July 5.

Acquired November 25, 2009, this true-color image shows Typhoon Nida near the island of Guam. High-profile clouds circle a well-formed eye at the center of the storm.