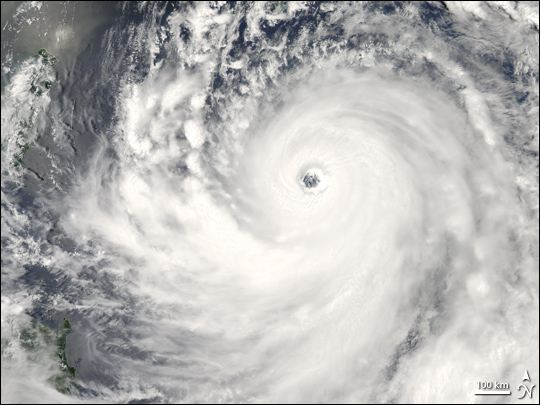 On July 12, 2007, Super Typhoon Man-Yi was a huge spiral of clouds, intense winds, and powerful thunderstorms as it arced northward over the western Pacific toward the southern end of the islands of Japan. Though far offshore, the Category 4 Super Typhoon was large enough that the outer bands of storm clouds were bringing wind and rain to Taiwan. Forecasts as of July 12 were calling for the storm to weaken as it traveled through the island chain and to reach Tokyo as a milder, but still powerful, typhoon on or around July 15.

The Moderate Resolution Imaging Spectroradiometer (MODIS) on NASA’s Aqua satellite acquired this photo-like image at 2:05 p.m. local time (5:05 UTC). Very near the same time MODIS was observing the storm, the Joint Typhoon Warning Center estimated Man-Yi’s sustained winds to be over 240 kilometers per hour (145 miles per hour). The satellite image confirms that Man-Yi was a powerful Super Typhoon. The storm has the hallmark tightly wound arms that spiral around a well-defined, circular eye. The symmetrical spirals, clear eye, and intense storm clouds around the eyewall (innermost band of clouds) are all features regularly seen in satellite images of other particularly powerful typhoons.

You can download a 250-meter-resolution Super Typhoon Man-Yi KMZ file for use with Google Earth.