(MODIS) on NASA’s Aqua satellite on August 30, 2009, shows the Timor Sea and what are probably oil slicks about 250 kilometers northwest of Western Australia."> 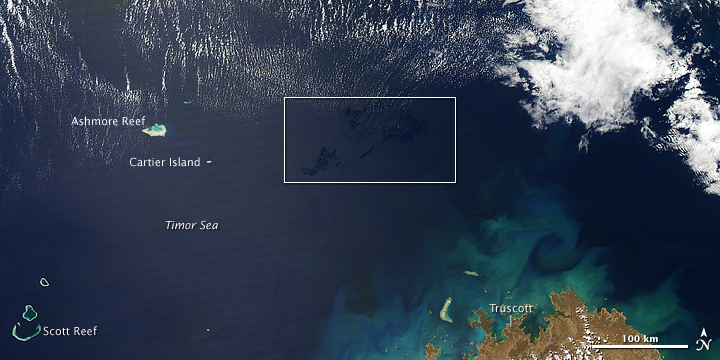 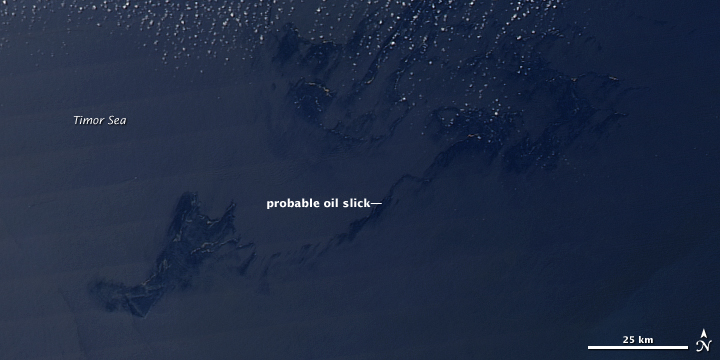 An oil well in the Timor Sea northwest of Australia has been leaking for more than a week. Operators continue to wait for a new rig to be brought to the site so that they can drill a relief well and cap the leaking one. This image from the Moderate Resolution Imaging Spectroradiometer (MODIS) on NASA’s Aqua satellite on August 30, 2009, shows the Timor Sea and what are probably oil slicks about 250 kilometers northwest of Western Australia.

Oil spills are usually difficult to see in natural-color (photo-like) satellite images, especially in the open ocean. Because the ocean surface is already so dark, the additional darkening or slight color change that results from a spill is usually imperceptible, especially once it starts to disperse. Occasionally viewing conditions are right, however, and the location of the oil slick coincides with the sunglint area of an image. When that happens, the slicks become more visible.

Sunglint is the mirror-like reflection of the Sun off the water. If the ocean were as smooth as a mirror, a sequence of nearly perfect reflections of the Sun would appear in a line along the track of the satellite’s orbit (Aqua orbits roughly south to north over the daylight side of the Earth). Because the ocean is never perfectly smooth or calm, however, the Sun’s reflection gets blurred as the light is scattered in all directions by waves. The blurred reflection gives the ocean surface a washed out appearance—the sunglint region.

An oil slick dampens waves on the water’s surface, changing the way it reflects light. The smoothing of the waves can make the oil-covered parts of the sunglint area more or less reflective than surrounding waters (depending on the exact location within the sunglint area and the sensor’s viewing angle). In this image, captured on August 30, 2009, the dark patches in the water at the eastern edge of the sunglint are likely oil slicks; they are similar in appearance to other slicks that have been detected in MODIS images, and they are in the correct location (near the leaking oil rig).

The slicks are located about 250 kilometers northwest of the Western Australia town of Truscott. The long distance from land is another indicator that these are oil slicks. Sometimes freshwater flowing into the sea can change the reflection in the sunglint area in a manner similar to an oil slick, but that explanation is unlikely for a location in the open ocean.

An oil rig in the Timor Sea began leaking oil and gas on August 21, 2009, and fuel continued to spill into the sea in mid-September.

The mirror-like reflection of the Sun off the surface of the Timor Sea highlights the location of an oil slick in this natural-color image from October 28, 2009.

Oil Seeps in the Gulf of Mexico

Oil slicks stood out in the glare of the Sun in May 2006 on the Gulf of Mexico.

Acquired May 17, 2010, this natural-color image shows the oil slick in the Gulf of Mexico extending a long arm toward the southeast.