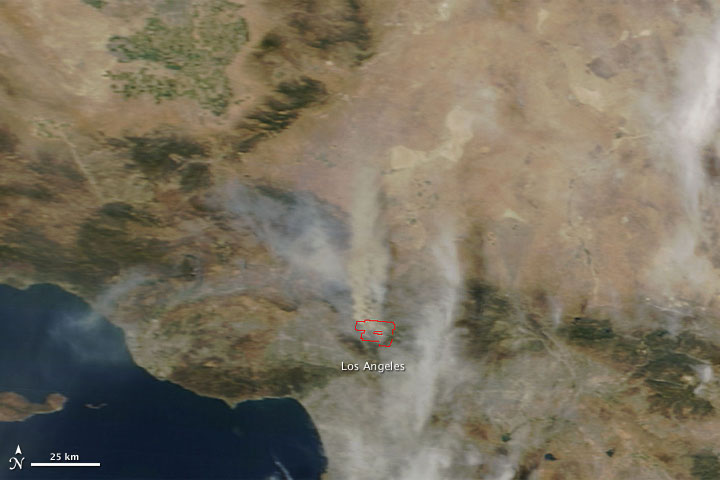 Wildfires raged in Los Angeles County on August 29, 2009. The Moderate Resolution Imaging Spectroradiometer (MODIS) on NASA’s Terra satellite captured this true-color image around 11:00 a.m. local time (18:00 UTC) the same day. The red outline is a hotspot where MODIS has detected unusually warm surface temperatures consistent with wildfires. Smoke blows north from the hotspot. Acquired near the edge of the satellite swath, this image appears slightly blurrier than would an image acquired by a satellite directly overhead.

According to an August 29 report from California’s Department of Forestry and Fire Protection, three fires burned in Los Angeles County that day. Near the city of Los Angeles, the Station fire was 0 percent contained, affected 5,000 acres, and threatened 1,800 residences. East of that wildfire was the Morris fire, which was 85 percent contained, affected 2,168 acres, and threatened 15 residences. Another fire, the PV fire, occurred along the coastline (not shown in this image). Affecting 230 acres and damaging 5 residences, that fire was 90 percent contained at the time of the bulletin.

Acquired on the afternoon August 29, 2009, this image shows fires burning north of the city of Los Angeles. Hotspots associated with the fire correspond with the Station and Morris fires described by the California Department of Forestry and Fire Protection.