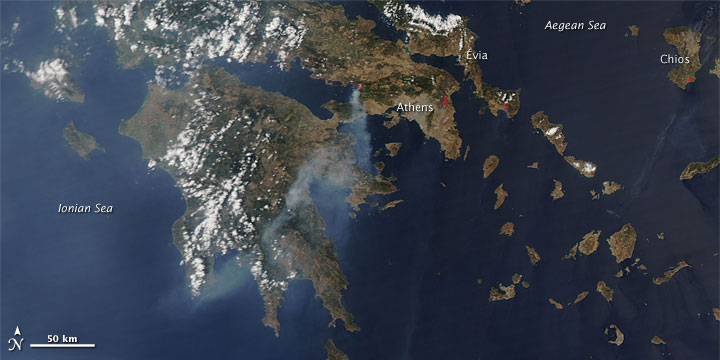 Fires burned across Greece in late August 2009, forcing thousands to flee their homes. Residents who remained behind tried to tame the blazes with tree branches and garden hoses, according to The New York Times. The fires were the most severe that Greece had faced since the deadly fires in the summer of 2007.

The Moderate Resolution Imaging Spectroradiometer (MODIS) on NASA’s Aqua satellite captured this true-color image on August 24, 2009. Red outlines indicate hotspots associated with fires, which burn as far east as the island of Chios. Most of the smoke visible in this image, however, comes from a fire west of the capital city, and that smoke forms a large plume over the Ionian Sea.

Greece is no stranger to summertime fires, prompted by high temperatures, fierce winds, drought, and even arson. The large fire near Athens had burned houses and destroyed large expanses forest by August 24, 2009, The New York Times reported.

Aided by strong winds, forest fires burned out of control in Greece in August 2009. The largest fire burned on the outskirts of Athens.