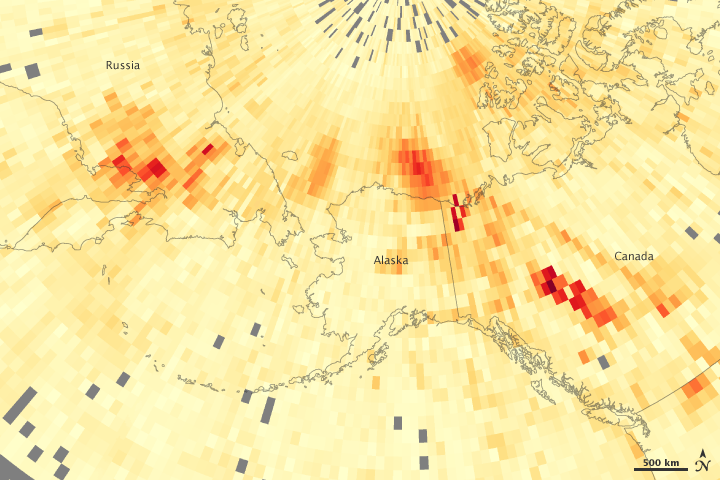 This aerosol index image is based on observations by the Ozone Monitoring Instrument (OMI) on NASA’s Aura satellite on August 1 and 2, 2009. The aerosol scale (yellow to dark reddish-brown) indicates the relative amount of particles that absorb sunlight. Its magnitude generally depends on the aerosol concentration and the height of the aerosol layer above the land or ocean surface. In general, aerosol concentrations are greatest near their source, and they dissipate downwind. But high aerosol index values can also occur downwind of source areas when aerosols have been lofted to high altitudes.

Thick pockets of aerosols collected over western Canada, eastern Russia, and off the northern coast of Alaska in early August 2009. In this index, the northernmost concentration of aerosols appears over the Northwest Territories, and the thickest aerosol concentrations appear just east of the Alaska-Canada border. Gray areas indicate where OMI collected no data.

This false-color image shows where airborne particles absorbed sunlight over the Arctic on August 1-2, 2009. The aerosols resulted from multiple large fires in the region.

Intense fires burning in the boreal forests of northern Russia, Alaska, and Canada darkened Northern skies with smoke in July and August 2009.