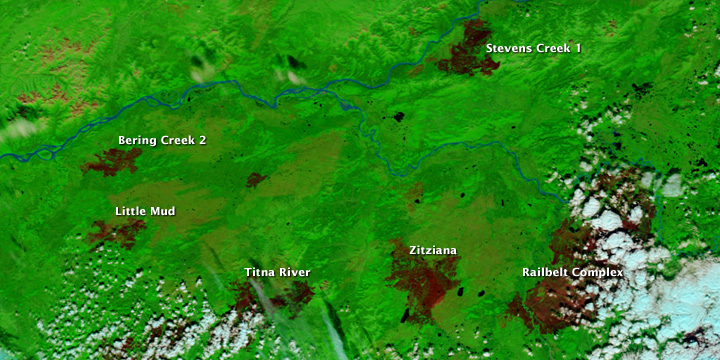 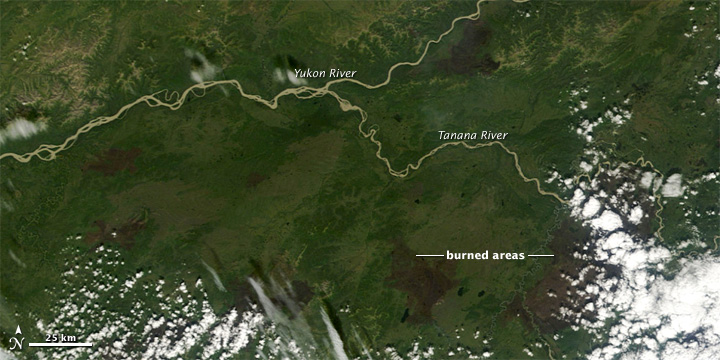 Cool, wet weather over the second weekend of August moderated fire activity in interior Alaska. When the skies cleared on August 9, 2009, the Moderate Resolution Imaging Spectroradiometer (MODIS) on NASA’s Terra satellite captured these images. Fires that had been churning out thick clouds of smoke the previous week were quiet; according to the daily situation report from the Alaska Interagency Coordination Center on August 11, 2009, however, the fires were still smoldering.

The top image is an infrared-enhanced view of the area at the confluence of the Tanana River with the Yukon, west of Fairbanks, made from a combination of visible, shortwave-infrared, and near-infrared light. Vegetation is bright green, water is dark blue (nearly black in marsh pools), and burned areas are brick red. The largest fire in the state, the Railbelt Complex, is partially hidden by clouds at image right. The lower image shows a natural-color (photo-like) view of the area. The muddy waters of the two rivers are light brown, and different kinds of vegetation, including spruce forests and muskeg, appear in shades of green. The burned areas are dark brown.

In east-central Alaska, the Pingo Fire was scorching hundreds of thousands of acres north of the Yukon River in early July 2004.