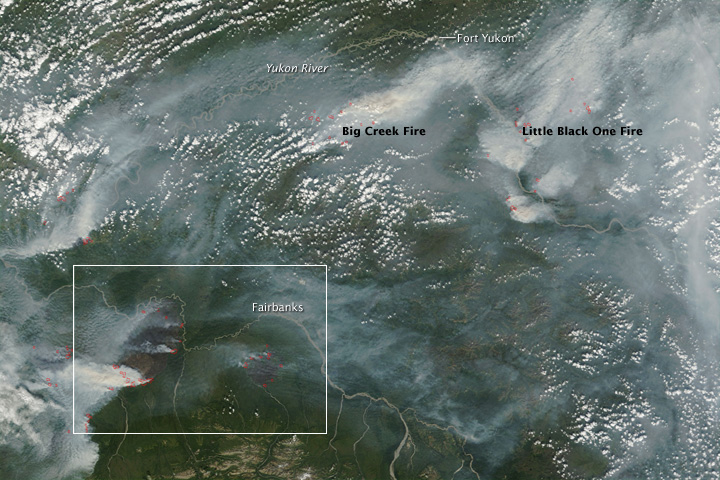 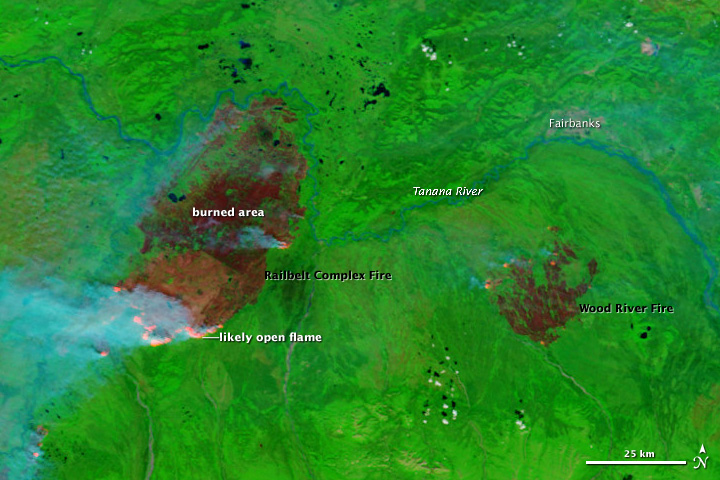 Large wildfires that began in July continued to burn in interior Alaska in the first week of August 2009. These images from the Moderate Resolution Imaging Spectroradiometer (MODIS) on NASA’s Terra satellite on August 2 show some of the state’s largest blazes and the thick pall of smoke they were creating. The top image is a natural-color (photo-like) view of the area, while the lower image combines visible, shortwave-, and near-infrared light to make burned areas (brick red) stand out better from unburned vegetation (bright green). In this kind of false-color image, the bright pink areas along the perimeters of the fires are often a sign of open flame.

According to the August 3 report from the Alaska Interagency Coordination Center, 483 fires had burned across the state so far this year, affecting about 2.4 million acres. The Railbelt Complex was the largest one burning in August, at an estimated 462,298 acres. The Tanana River appears to be creating a natural firebreak at the northern edge of the fire, which is spreading to the south. To the east, the smaller Wood River Fire (107,634 acres) has bright pink spots along both its northern and southern perimeters. Both these fires, as well as the Big Creek Fire (145,652 acres) and Little Black One Fire (292,907 acres) along the Yukon River, were triggered by lightning.

Several lightning-triggered fires were burning near the Tanana River, southwest of Fairbanks, Alaska, on July 7, 2009.