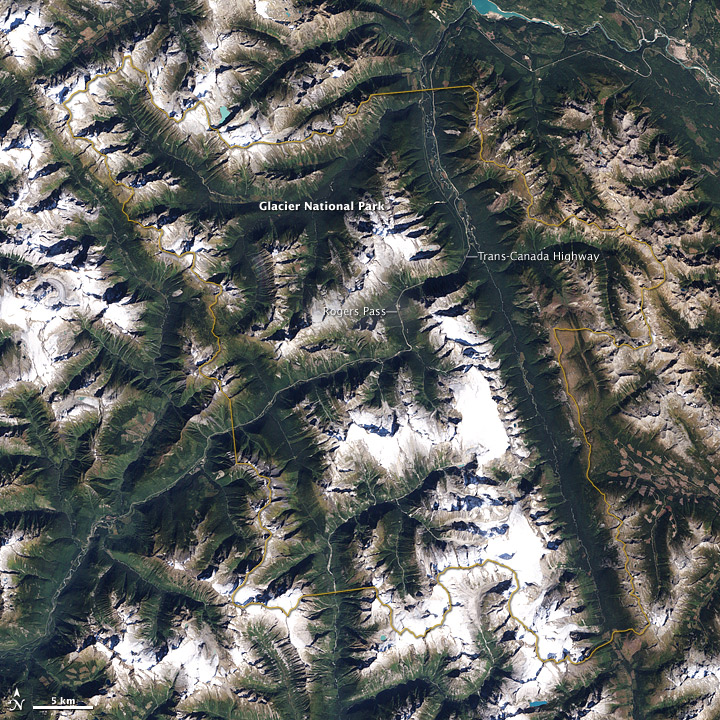 Canada’s Glacier National Park, some 340 kilometers (210 miles) west-northwest of Calgary, is one of two national parks devoted to the Columbia Mountains. Comprising the first tall mountains east of Canada’s coastal range, and sitting just west of the Canadian Rockies, the Columbia Mountains have a distinct character, with weather driven by the Pacific Ocean, generous precipitation, and generally milder wintertime temperatures than some other Canadian mountain ranges.

The Enhanced Thematic Mapper on NASA’s Landsat 7 satellite captured this true-color, photo-like image of Glacier National Park on September 14, 2001. A yellow border delineates the park boundary. The park appears predominantly in shades of green and white. In between richly vegetated valleys—one of which holds a major roadway—snowy white peaks cast long shadows toward the north.

Parks Canada describes three life zones in the park: “rainforest, snowforest and no forest.” Although we usually think of rainforests as tropical, such forests also exist in temperate zones. At the lowest elevations in Glacier National Park, precipitation falls primarily as rain, and the forests here resemble temperate rainforests in the Pacific Northwest. At higher elevations, precipitation falls mostly as snow, and wintertime accumulation is significant. Above roughly 2,000 meters (about 6,560 feet), trees no longer thrive. Half of the land area in Glacier National Park is above treeline. Some of that area consists of tundra, but mostly it consists of bare rock. Permanent ice or snow covers about 12 percent of the park.

The Trans-Canada Highway passes through the park, appearing as a pale gray line. The opening of the Rogers Pass portion of the highway in 1962 marked an automobile-friendly era in the park’s history. Campgrounds, picnic areas, and a visitor center populate the areas near this roadway.

This true-color image of Glacier National Park in Canada, acquired in September 2001, shows a landscape of lush vegetation alternating with snow-capped peaks.