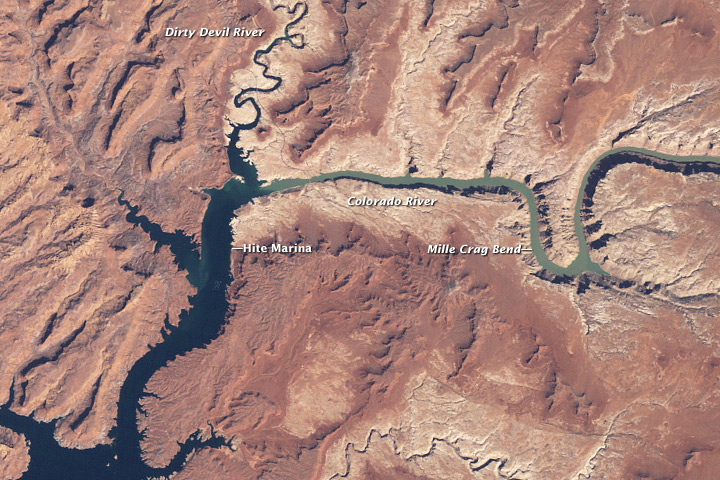 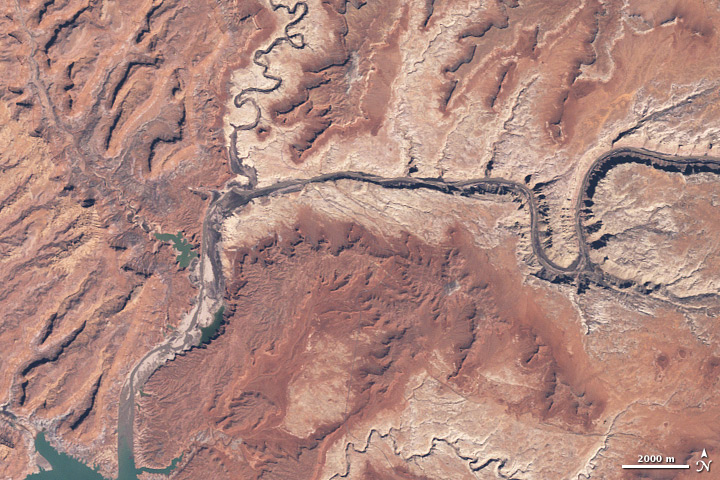 In southern Utah, the Colorado River, halted by Arizona’s Glen Canyon Dam, creates Lake Powell, a meandering, narrow reservoir that follows the contours of the river. In the early twenty-first century, this modern marvel of engineering faced an ancient enemy: severe, prolonged drought in the American Southwest. Combined with water withdrawals that many believe are not sustainable, the drought has taken its toll on Lake Powell water levels.

NASA’s Landsat 5 satellite captured these natural-color images on March 25, 1999 (top), and April 2, 2005 (bottom). Both images show the northeastern reaches of Lake Powell, where it fills Glen Canyon and connects with the Colorado and Dirty Devil Rivers (at normal water levels, both rivers are drowned by the lake). The southward-reaching finger of land in the right half of each image is Mille Crag Bend, and the Colorado River flows around the bend’s southern perimeter en route to Lake Powell. Sunlight brightens plateaus and southeast-facing slopes, casting shadows on the northern and western faces of this rugged landscape.

In the image acquired on March 25, 1999, water levels in Lake Powell appear normal. The main body of Lake Powell and the branch into Dirty Devil Canyon are dark blue. Flowing into Lake Powell, the Colorado River appears green-brown, indicative of sediment-rich water. The image from April 2, 2005, however, shows a vastly different situation. In this image, Lake Powell’s water levels have dropped so much that the northwestern side branch of the reservoir (called North Wash) has been isolated from the main water body. In the main body of Lake Powell, water pools along its eastern edge while the western portion shows large expanses of dry canyon floor. Narrow Canyon and Dirty Devil Canyon appear in earth tones. (At low water levels, the Dirty Devil River can be too narrow for Landsat to detect.)

Lake Powell’s water levels plummeted in 2005, according to the U.S. Department of the Interior Bureau of Reclamation. Water levels recovered somewhat over the next two years, but dry conditions struck again in 2008. For a time series of Lake Powell images from 1999 to 2009, see the Earth Observatory feature World of Change: Lake Powell.

Image by Robert Simmon, based on data provided by the Landsat 5 science team. Caption by Michon Scott and Rebecca Lindsey.