Dust Plumes off Pakistan and Iran 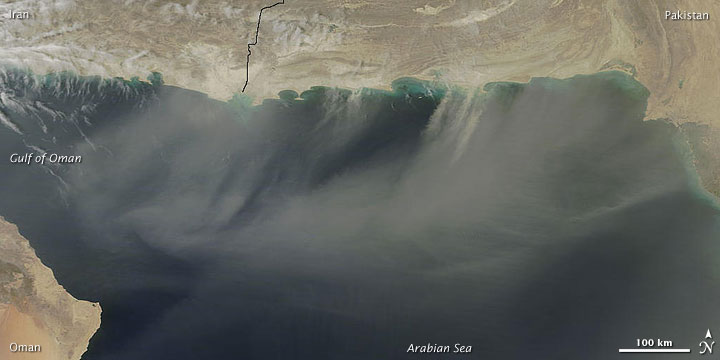 Dust plumes blew off the coasts of Pakistan and Iran in early May 2009. The Moderate Resolution Imaging Spectroradiometer (MODIS) on NASA’s Terra satellite captured this image on May 4, 2009. In this true-color image, tan plumes blowing over the ocean vary in thickness—some opaque, others translucent. Most of the dust blows off the Pakistan coast. As skies inland appear clear, much of this dust likely originates along the shore.

In India’s state of Rajasthan, along the India-Pakistan border, dust-storm activity was actually expected to bring relief from a severe heat wave, according to a report in The Times of India on May 3, 2009. Extreme heat increases the likelihood of dust storms, and some of the dust in this image might have traveled from areas farther inland in India and Pakistan.

This true-color image shows dust plumes of varying thickness blowing off the coasts of Iran and (especially) Pakistan on May 4, 2009.

Dust Blowing off the Coast of Pakistan 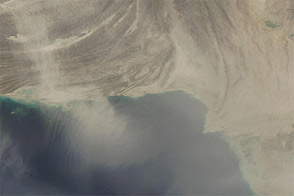 Dust off Iran and Pakistan