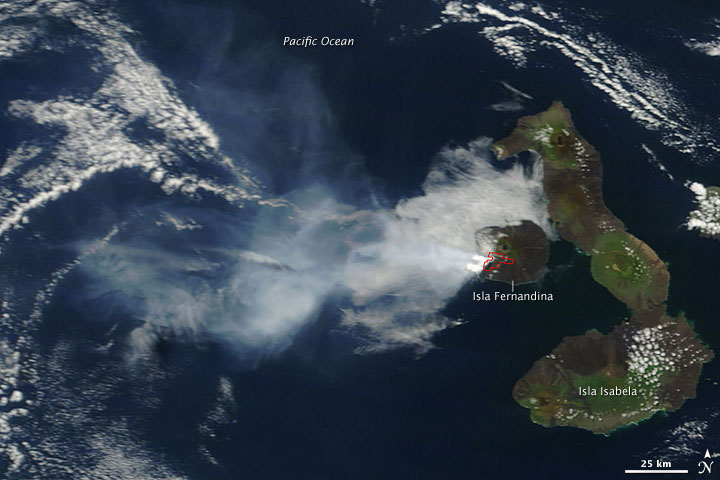 In early April 2009, La Cumbre Volcano on Isla Fernandina in the Galapagos Islands erupted. On April 11, 2009, authorities at the Galapagos National Park reported that the volcano was releasing both lava flows and volcanic ash plumes. The same day, the U.S. Air Force Weather Agency reported that a volcanic ash plume extended approximately 150 kilometers (80 nautical miles) southwest of the volcano.

The Moderate Resolution Imaging Spectroradiometer (MODIS) on NASA’s Terra satellite captured this image of the volcano on April 11, 2009. This true-color image shows Isla Fernandina and its neighbor, Isla Isabela. The red outline on Isla Fernandina is a hotspot where MODIS detected unusually hot surface temperatures. A bank of clouds encircles the northern and western part of the island; a volcanic plume—probably ash and steam—streams westward and spreads out over the ocean. The plume’s contours are more diffuse than the contours of nearby clouds.

Isla Fernandina supports wildlife that could be threatened by the April 2009 burst of volcanic activity, according to rangers at Galapagos National Park. As the island has no human residents, however, no settlements were endangered. Park rangers and a passing tourist boat initially observed the volcano at 10:00 p.m. local time on April 10, 2009. A sparse human population in the western reaches of the Galapagos Islands means that volcanic activity is not always observed or reported as soon as it starts. The seismic station at Puerto Ayora, on the nearby island of Santa Cruz, recorded no earthquakes associated with this eruption.

Isla Fernandina is a shield volcano with a low, broad shape that resembles an ancient warrior shield. This volcanic island has an elongated summit caldera roughly 5 kilometers by 6.5 kilometers (3 by 4 miles) wide, and fissures on the caldera’s outskirts have facilitated the volcano’s growth over time. Lava from the volcano has flowed both into the central caldera and toward the island’s shoreline.

This true-color image from April 27, 2009, shows a faint plume blowing away from Isla Fernandina, and a hotspot near the volcano summit.