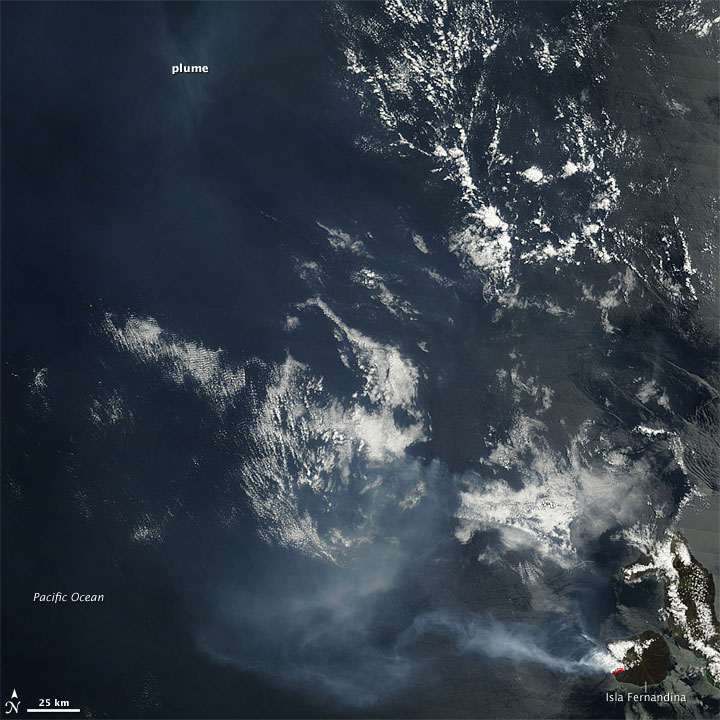 In this true-color image, the volcano sends a plume westward; it expands, mingles with clouds, and turns north. Although faint, the plume perseveres far northwest of the volcano (image upper left). Opaque white puffs near the volcanic summit may be part of the plume, or may be clouds collected over the volcano. Compared to the nearby clouds, the volcanic plume is blue-gray, with less distinct margins. The red outlines on the volcano are hotspots where MODIS detected unusually warm surface temperatures.

Along the right edge of this image, the ocean surface appears strangely textured, similar to a rough land surface. This appearance results from sunglint—the mirror-like reflection of sunlight off the ocean surface.

Isla Fernandina is a shield volcano with a low, broad shape that resembles an ancient warrior shield. Producing both plumes and lava flows, the 2009 eruption marked Isla Fernandina’s first burst of volcanic activity since 2005. Because the Galapagos Islands are home to unique species, authorities expressed concern that the new spate of eruptions might threaten local wildlife.

This true-color image from April 27, 2009, shows a faint plume blowing away from Isla Fernandina, and a hotspot near the volcano summit.

This true-color image shows a faint plume blowing almost straight north from the summit of Indonesia’s Dukono Volcano on August 4, 2009.