Haze over the Sea of Azov 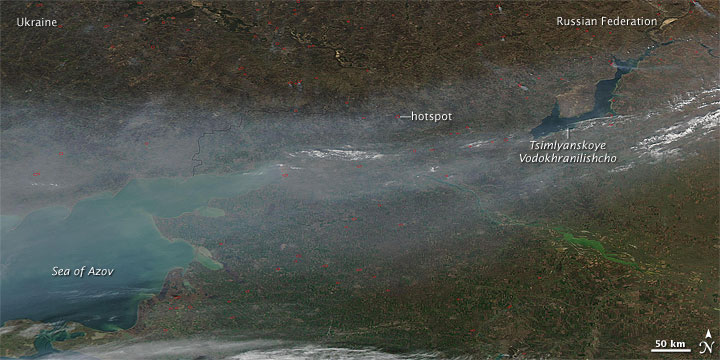 A narrow band of haze formed over the Sea of Azov on April 7, 2009. The Moderate Resolution Imaging Spectroradiometer (MODIS) on NASA’s Aqua satellite took this picture the same day. The haze appears especially thick over the Sea of Azov, and seems to thin toward the east. The thick-looking haze in the west, however, might result in part from that area’s location near the edge of the satellite swath, where the sensor had to look through a thicker layer (longer path) of atmosphere.

Throughout this image, red dots indicate hotspots where MODIS detected unusually warm surface temperatures, likely resulting from agricultural fires and/or wildfires. The fires likely contribute to the haze, and one example is a fire on the western shore of Tsimlyanskoye Vodokhranilishcho, which sends its smoke eastward. Given the broad distribution of the fires and the narrow band of haze, however, air currents probably play a role in channeling the haze into a fairly narrow east-west band.

MODIS shows a narrow east-west band of haze over and west of the Sea of Azov on April 7, 2009.

Haze over the Sea of Japan

A band of haze over the Sea of Japan appears as a wide swath of translucent dingy gray in this image from April 10. 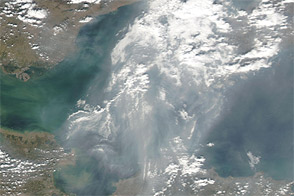 Haze from India to the Arabian Sea

Acquired November 2, 2010, this natural-color image shows haze stretching from the southern face of the Himalaya over parts of India and Pakistan to the Arabian Sea.

Haze clung to the southwestern face of the Himalaya on October 30, 2008.