Haze from India to the Arabian Sea 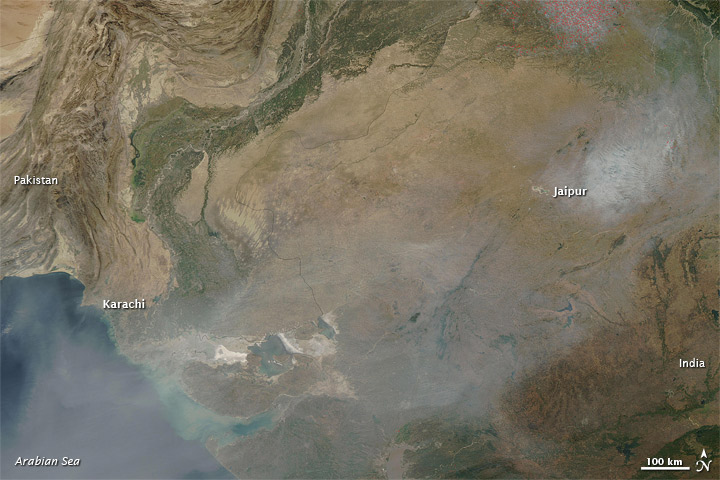 Haze stretched from the southern side of the Himalaya to the Arabian Sea at the beginning of November 2010. The Moderate Resolution Imaging Spectroradiometer (MODIS) on NASA’s Aqua satellite captured this natural-color image on November 2.

Immediately south of the Himalaya (image upper right), a multitude of red dots indicates hotspots—areas where MODIS has detected unusually high surface temperatures associated with fires. The fires are probably agricultural fires. They likely contribute to the regional haze, but may not account for all of it. Some of the haze probably results from urban and industrial pollution.

South of the fires is an especially thick bank of haze, immediately east-northeast of Jaipur, India. That haze is thick enough to completely obscure the satellite sensor’s view of the land surface below. Southwest of that thick concentration of haze, a thinner veil extends past the city of Karachi, Pakistan, and over the Arabian Sea.

Acquired November 2, 2010, this natural-color image shows haze stretching from the southern face of the Himalaya over parts of India and Pakistan to the Arabian Sea. 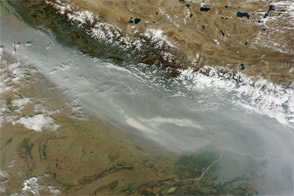 Thick haze stretches from Pakistan to Bangladesh in this image from November 3, 2011.