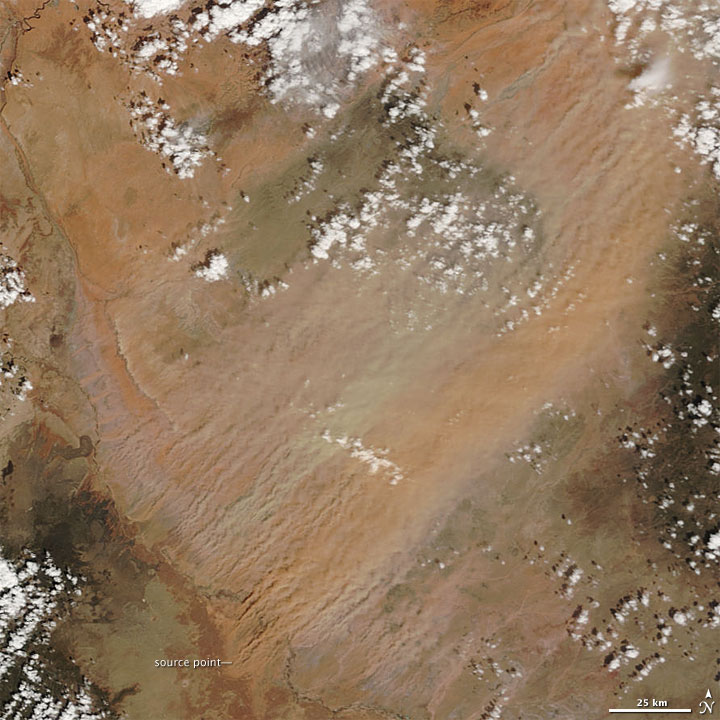 A dust storm struck northeastern Arizona on April 3, 2009. With winds over 145 kilometers (90 miles) per hour reported near Meteor Crater, east of Flagstaff, the storm reduced visibility and forced the temporary closure of part of Interstate 40, according to The Arizona Republic.

The Moderate Resolution Imaging Spectroradiometer (MODIS) on NASA’s Terra satellite captured this image on April 3, 2009. Clear skies allow a view of multiple source points of this dust storm. The source points occur along an arc that runs from northwest to southeast.

This dust storm occurred in the area known as Arizona’s Painted Desert, and the dust plumes show why. Whereas many dust plumes are uniform in color, these plumes resemble a band of multicolored ribbons, ranging from pale beige to red-brown, reflecting the varied soils from which the plumes arise. The landscapes of the Painted Desert are comprised mostly of Chinle Formation rocks—remains of sediments laid down during the time of the first dinosaurs, over 200 million years ago.

A MODIS image shows a dust storm blowing through northeastern Arizona in early April 2009. Clear skies allow a view of numerous source points for the storm.