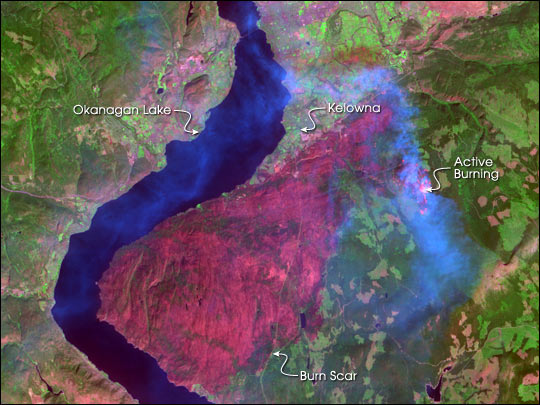 About 50 miles north of the Washington (U.S.)-British Columbia (Canada) international line, a devastating wildfire has been burning in the Okanagan Mountain Park for several weeks. Tens of thousands of people have been on and off evacuation alert during that time, as the fire flares and subsides in response to varying terrain and weather conditions.

As of September 5, 2003, nearly 3200 people in the southeastern part of the city of Kelowna were ordered from their homes as the 23,000-hectare (~57,000-acre) fire moved closer. At one point, nearly 30,000 people were forced out, about one-third of the city’s total population. This image from the Advanced Spaceborne Thermal Emission and Reflection (ASTER) radiometer on the Terra satellite was captured on September 2, 2003, and shows the widespread devastation left by the blaze.

The deep pink area tucked into the bend in Okanagan Lake is the burned area. Smoke (light blue) and areas of active burning (bright pinkish-white) are visible at the northeast perimeter of the fire. North of the fire is the city of Kelowna. Vegetation is in various shades of green.

A large fire that broke out northwest of Kelowna in mid-July continued to burn on July 23, 2009.