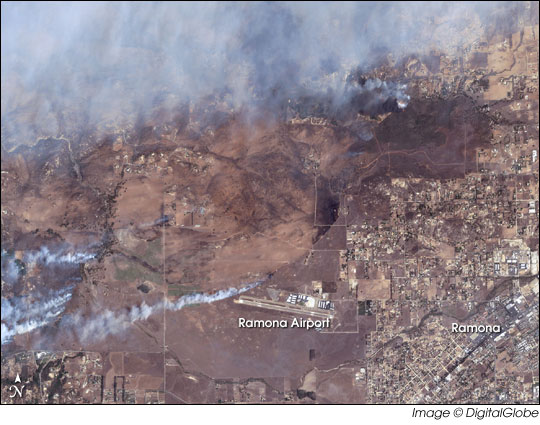 The Witch Fire in San Diego County was encroaching on the city of Ramona on October 22, 2007, when the commercial satellite Quickbird captured this high-resolution view of the area. A line of smoke plumes cuts diagonally through the scene just north of Ramona Airport, and to the west, distinct plumes rise from smaller fires near the airport. Other actively burning areas in the north appear to follow the edge of a natural area or park north of the city. A close -up view of the northern fire front (cropped from the same large image available above) shows intense burning in the hills immediately northeast of the city.

As of October 25, 2007, the Witch Fire had burned 196,240 acres and was 20 percent contained, said the National Interagency Fire Center (NIFC). The fire destroyed hundreds of homes and businesses in Ramona and the surrounding communities. On October 25, the strong winds that had driven the fire abated, giving fire fighters a chance to begin to contain the flames, said NIFC. The Witch Fire was the largest of 11 wildfires burning in southern California from north of Los Angeles to the Mexican border. The fires burned approximately 1,600 homes between October 21 and October 25, reported Reuters.