Dust Storm over the Arabian Peninsula 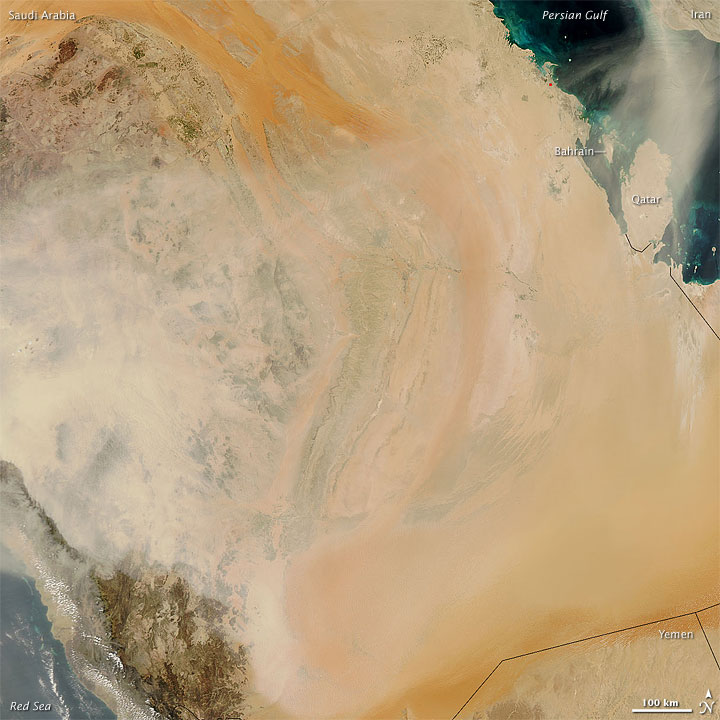 Dust plumes swept across the Arabian Peninsula in early March 2009, stretching from the Red Sea to the Persian Gulf and beyond. The Moderate Resolution Imaging Spectroradiometer (MODIS) on NASA’s Aqua satellite captured this image on March 11, 2009.

In this image, dust plumes appear as translucent beige blurs over the Arabian Peninsula and the nearby water. The dust appears especially thick in the southwest, near the Red Sea, and over the Persian Gulf. A dust plume passes directly over Bahrain and Qatar, heading north toward Iran.

According to the Agence France-Presse, the springtime dust storm disrupted air traffic in Saudi Arabia and neighboring Kuwait for several hours on March 10. After conditions improved, airports reopened. The Associated Press reported that Saudi Arabia’s capital city of Riyadh was cleaning up its new blanket of sand on March 11, the same day MODIS acquired this image.

Dust plumes swept across the Arabian Peninsula in early March 2009, stretching from the Red Sea to the Persian Gulf and beyond.