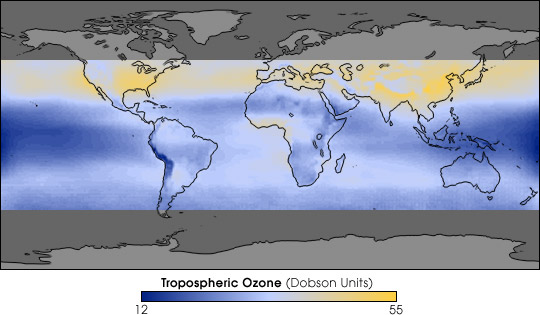 In the stratosphere, ozone shields us from the Sun’s deadly ultraviolet radiation. But in the troposphere, this same gas impairs lung capacity and reduces agricultural productivity. Both human activities and natural processes generate the chemical compounds that serve as “precursors” to the formation of ozone. Currently, human activities generate about as much ozone as natural processes do, creating a public health hazard.

This map, derived from satellite data, shows tropospheric ozone distribution in June, July, and August from 1979 to 2000. Considerably more ozone pollution exists in the Northern Hemisphere than in the Southern Hemisphere year round. In the three northern continents, plumes of ozone originate over the eastern portions of each landmass and travel for several thousand kilometers with the prevailing westerly winds. In low latitudes in the Southern Hemisphere, ozone concentrations are most pronounced during austral spring (September-November).