Dust South of the Sahel 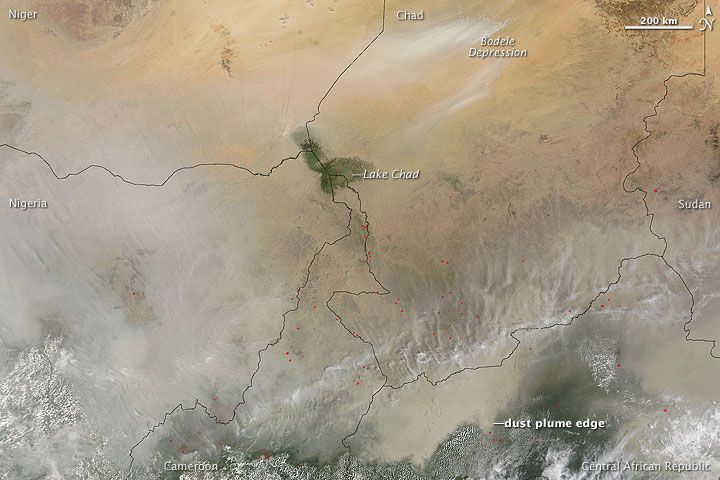 At the beginning of March 2009, a combination of dust and clouds hovered just south of the African Sahel, the semiarid band of land south of the Sahara. The Moderate Resolution Imaging Spectroradiometer (MODIS) on NASA’s Terra satellite took this picture on March 1, 2009.

In this image, dual dust plumes blow out of the Bodele Depression, on the southern edge of the Sahara Desert, toward Lake Chad. An area of relatively clear skies separates these plumes from larger dust clouds in the south and west. A large, amorphous plume hangs over much of Nigeria and Cameroon. Particularly thick clouds of dust hover over the Central African Republic (image lower right). The dust plume in the northwestern part of that country shows a distinct boundary along the plume’s southern margin. South of that dust plume, small clouds fill the sky. North of the dust plumes hovering over Cameroon and the Central African Republic, long, thin clouds appear to hover above the dust.

Tiny red dots appear throughout the lower half of this image. These dots are hotspots, where MODIS has detected unusually hot surface temperatures associated with wildfires or agricultural fires. These fires may contribute smoke to the hazy mass over the region, but the particles suspended in the skies between Nigeria and Sudan probably consist primarily of dust.

A combination of dust and clouds hovered over Africa south of the Sahel at the beginning of March 2009.