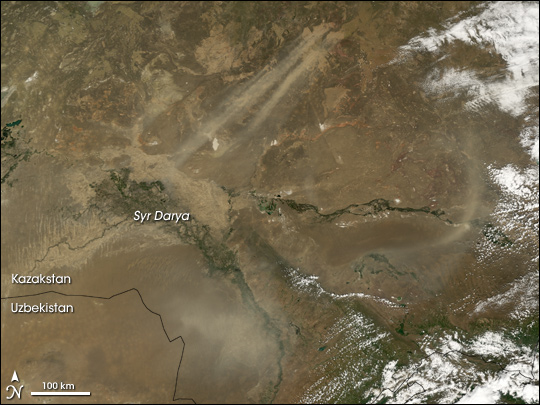 Plumes of dust swept through Kazakhstan on May 20, 2006. The Moderate Resolution Imaging Spectroradiometer (MODIS) flying onboard NASA’sTerra satellite took this picture the same day. In this image, one plume of dust moves in a straight line to the north of the Syr Darya valley. Another plume of dust appears to the south, near the border with Uzbekistan. A third plume of dust appears in the east, close to some clouds.

Kazakhstan has an arid to semiarid climate prone to extreme temperatures and dust storms. It ranks among the world’s great dust-producing areas, along with the Middle East and the Sahara.