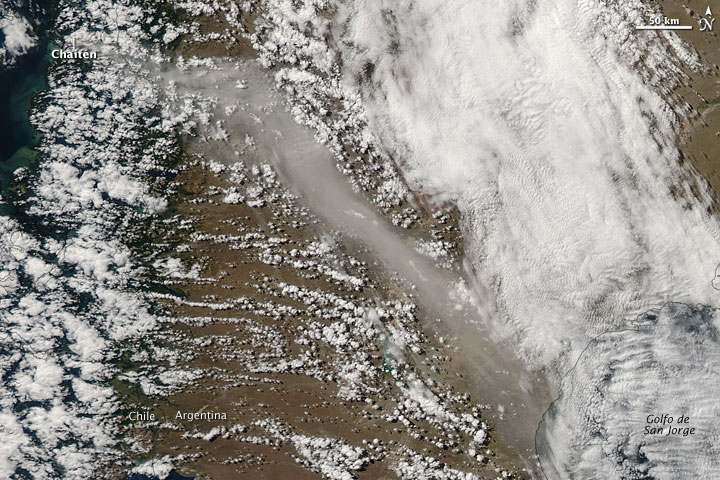 Some 150 people had returned to the Chilean town of Chaitén by early 2009, months after a catastrophic eruption of the nearby volcano of the same name forced an evacuation. After a fresh eruption on February 19, 2009, however, authorities had to evacuate town residents all over again, according to a report from the BBC. The eruption produced both ash emissions and pyroclastic flows—scalding avalanches of volcanic gas and debris—according to the Volcanism Blog.

While the pyroclastic flow was reported to have traveled in the direction of the coastal town of Chaitén, southwest of the volcano, winds carried the ash plume toward the southeast. The Moderate Resolution Imaging Spectroradiometer (MODIS) on NASA’s Aqua satellite captured this image of the ash plume on February 19, 2009. In this image, abundant clouds partially obscure the satellite’s view of the landscape, but the ash plume still appears crossing Patagonia. The ash plume is a slightly darker color than the clouds, and it has a more diffuse outline; it spreads spreads all the way to Golfo de San Jorge, off Argentina’s east coast.

The BBC reported that the ash plume from this eruption reached an altitude of 30 kilometers (19 miles), disrupting flights in the region. While officials stated that the volcano’s two craters had fused, thereby easing pressure, they warned that another explosive eruption could occur at any time.

A new eruption of the Chaitén Volcano forced authorities to evacuate residents who had returned to the nearby town of the same name. Ash emissions from the eruption spread across Patagonia to the Argentine east coast.