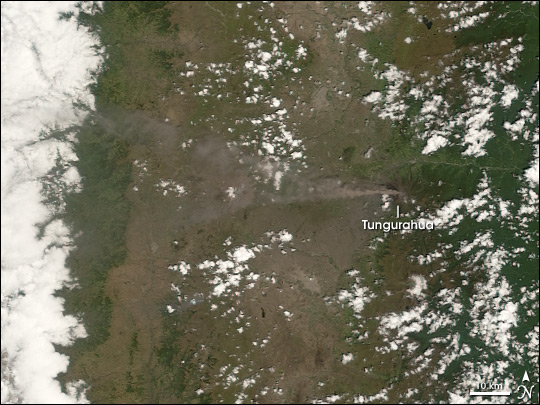 The Tungurahua Volcano in Ecuador emitted a plume of volcanic ash in late October 2006. The Moderate Resolution Imaging Spectroradiometer (MODIS) on NASA’s Terra satellite captured this image on October 25, 2006. Several days earlier, an eruption of lava and ash forced the evacuation of some 300 local villagers, according to news reports. In this image, a plume of volcanic ash blows westward from the volcano’s summit, fanning out as it goes. The plume is fairly dark, suggesting that its contents are fairly high in ash, as opposed to a white plume, which would have more water.

One of Ecuador’s most active volcanoes, Tungurahua is a stratovolcano composed of alternating layers of hardened lava, ash, and rock. It underwent a major eruption from 1916 to 1918. Another major eruption in 1995 forced the temporary evacuation of a nearby city. An eruption in the summer of 2006 caused widespread crop damage, forced evacuations, and claimed several lives.

A 250-meter-resolution KMZ file of Tungurahua is available for use with Google Earth.