Scandinavia and the Baltic Region 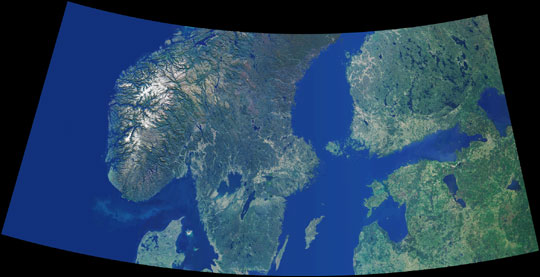 Data from the Multi-angle Imaging SpectroRadiometer’s vertical-viewing (nadir) camera were combined to create this cloud-free natural-color mosaic of Scandinavia and the Baltic region. The image extends from 64° N, 0° E in the northwest to 56° N, 32° E in the southeast, and has been draped over a shaded relief Digital Terrain Elevation Model from the United States Geological Survey. It is displayed in an equidistant conic projection.

The image area includes southern Norway, Sweden and Finland, northern Denmark, Estonia, Latvia and part of western Russia. Norway’s rugged western coastline is deeply indented by fjords. Elongated lakes, formed by glacial erosion and deposition, are characteristic of the entire region, and are particularly dense throughout Finland and Sweden. Numerous islands are present, and a virtually continuous chain of small, scattered islands occur between Sweden and Finland. The northern and eastern waters of the Baltic Sea are almost fresh, since the Baltic receives saltwater only from the narrow and shallow sounds between Denmark and Sweden that connect it to the North Sea. Most of the major cities within the image area are coastal, including St. Petersburg, Stockholm, Helsinki, Riga, and Oslo.

The Multi-angle Imaging SpectroRadiometer (MISR) observes the daylit Earth continuously from pole to pole, and every 9 days views the entire globe between 82° north and 82° south latitude.

Image courtesy NASA/GSFC/LaRC/JPL, MISR Team. Jim Knighton of Clear Light Image Products produced the image mosaic. Please note that the image shown here is at a pixel resolution of approximately 1.1 kilometers, but a more detailed version at a resolution of 278 meters is available from the producer. Text by Clare Averill.

City lights trace the coastlines, while moonlight illuminates the snow and clouds.