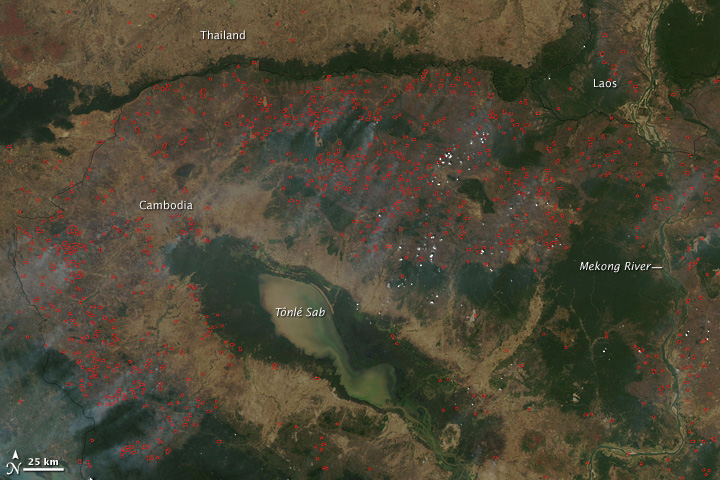 Agriculture-related fires are common in Southeast Asia in late winter, which is the middle of the area’s dry season. This image from the Moderate Resolution Imaging Spectroradiometer (MODIS) on NASA’s Aqua satellite on February 9, 2009. Places where the sensor detected active fires are outlined in red. An arc of hundreds of individual fires wraps around the northern part of Cambodia, north of the Tônlé Sab lake. Grassy areas appear light tan, and the country’s remaining tropical forests appear lush green.

The fires probably have diverse causes, including forest clearing for crops, and maintenance of existing pasture, cropland, and unimproved roads and paths. In addition, people set fires in the forest regions to increase the yield of natural resins that are produced by rainforest trees, to hunt, and to drive bees away from their hives so that honey can be collected. Of course, intentionally lit fires sometimes get out of control, and some of the fires in this scene could be the result of accident or negligence, just as they sometimes are in the United States.

Agricultural fires of many kinds are common in Southeast Asia in the late winter, which is the mid-dry season for the region. Widespread fires were detected across eastern Burma (Myanmar), Thailand, and Laos in satellite images from early March 2009. 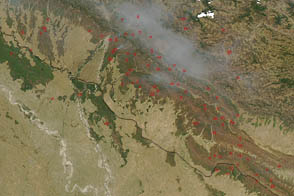