Evidence of Drought in South Africa 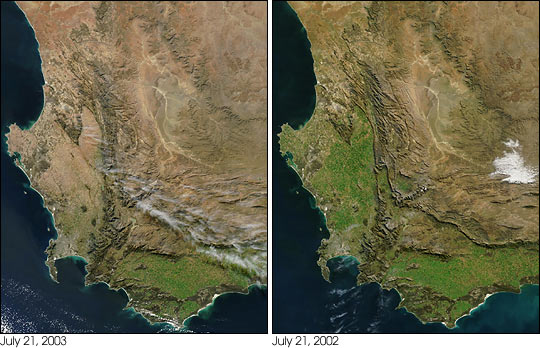 The current drought in South Africa’s Western Cape province is withering and stunting vegetation across this crop-producing region. The pair of images above shows southwestern Africa on July 21, 2003 (left), and July 21, 2002 (right). Vegetation health (greenness) is dramatically reduced in the left hand image, particularly in the region between Cape Columbine (left center edge) and southward to the Cape of Good Hope (narrow strip of land on the outside of the horseshoe-shaped False Bay).

Most of South Africa’s wheat is produced in the Western Cape, with the areas in the southwest corner of the province (known as Swartland and R–ens) being among the most important wheat-producing regions in South Africa. Erratic rainfall in the Western Cape often produces wide variations in wheat yields and quality, with the country having a surplus of wheat only during very good rainfall years and shortages during the majority of years. Low rainfall and soil moisture conditions in the Western Cape will reduce this year’s wheat and barley crops.